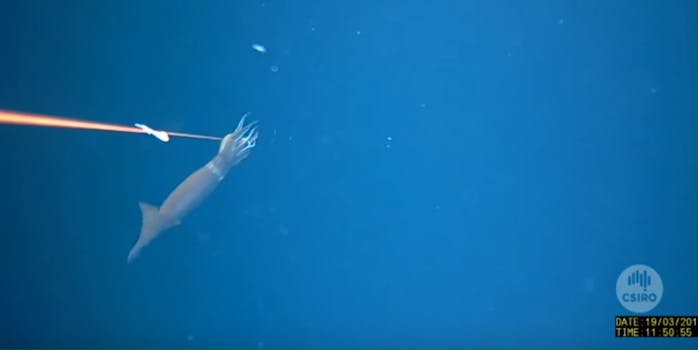 Amid all of our modern daily stresses, it’s tempting to look at nature and consider how much simpler things could be.

Just look at this squid, captured by CSIRO underwater research cameras. He’s living that squid life, trying to grab a snack, and OH GOD HE’S BEING EATEN. So much for the tranquility of life free from the burdens of social media and cable TV news.

CSIRO’s video and transcript don’t provide much detail, so it’s unclear what kind of squid we’re looking at. It’s also not certain whether the larger squid dragged the smaller squid away for dinner or a romantic interlude. Typically, squid mating occurs bottom to bottom, so the angle of the attack doesn’t look promising for the smaller squid. Sorry, buddy.

This is just the latest research video that’s helping us learn more about cephalopods (the clever and squishy group of creatures that include squid, octopuses, and cuttlefish). While there’s no doubt nature can be brutal, it can also fortunately be pretty adorable too. Watch this tiny dumbo octopus hide in his own tentacles, and enjoy a blissful few seconds completely worry-free.