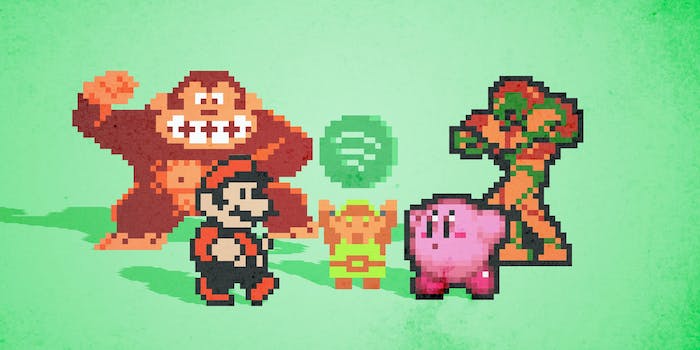 Spotify’s newest channel is all about video game music

Spotify's just made it a lot easier for gamers to find new jams.

For gamers who want to listen to songs from their fave shooter or RPG, Spotify actually has a decent stock of video game soundtracks. Now it’s amped up its selection by adding a new channel called Spotify Gaming, dedicated to music to hold a controller to.

The new channel is split into three sections: Spotify Curated, Original Soundtracks, and Community Playlists. Playlists contains some stellar selections, such as I Am Setsuna, The Last of Us, Mass Effect, and Grand Theft Auto. These are not all new additions, but it’s terrific to have them in a spot where they’re easier to browse (you can also look for soundtracks alphabetically).

The Spotify Curated section is aimed more at music to be played while gaming vs. music from video games soundtracks. From electronic bangers to heavy metal, there’s a solid selection of jams to choose from if you’re not the type to listen to the sounds of the game you’re playing.

Community Playlists is the most fun of the three, probably because some of what’s featured on it was made by people who work in the gaming industry. Check out the guest playlists from blogs Polygon, Gamesbeat, and GamesRadar. Now plug in your big, comfy over-the-ear headphones and enjoy.