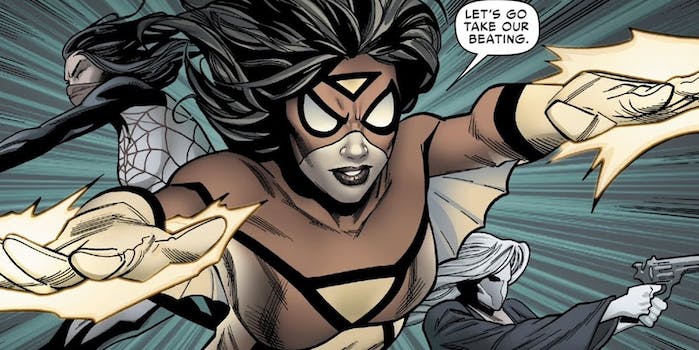 Spider-Woman isn’t the sex kitten you were expecting

Heroine Jessica Drew is more than the other butt that broke the Internet.

Back in August, Marvel Comics teased a Milo Manara variant cover for Spider-Woman that looked like an outtake from Nicki Minaj’s Anaconda video.

Internet rage ensued and Marvel apologized for the “mixed messaging,” while defending Manara as an artist. A slightly modified version of Manara’s prone Spider-Woman cover hit newsstands this week, with the book’s title plastered over the offending tush. 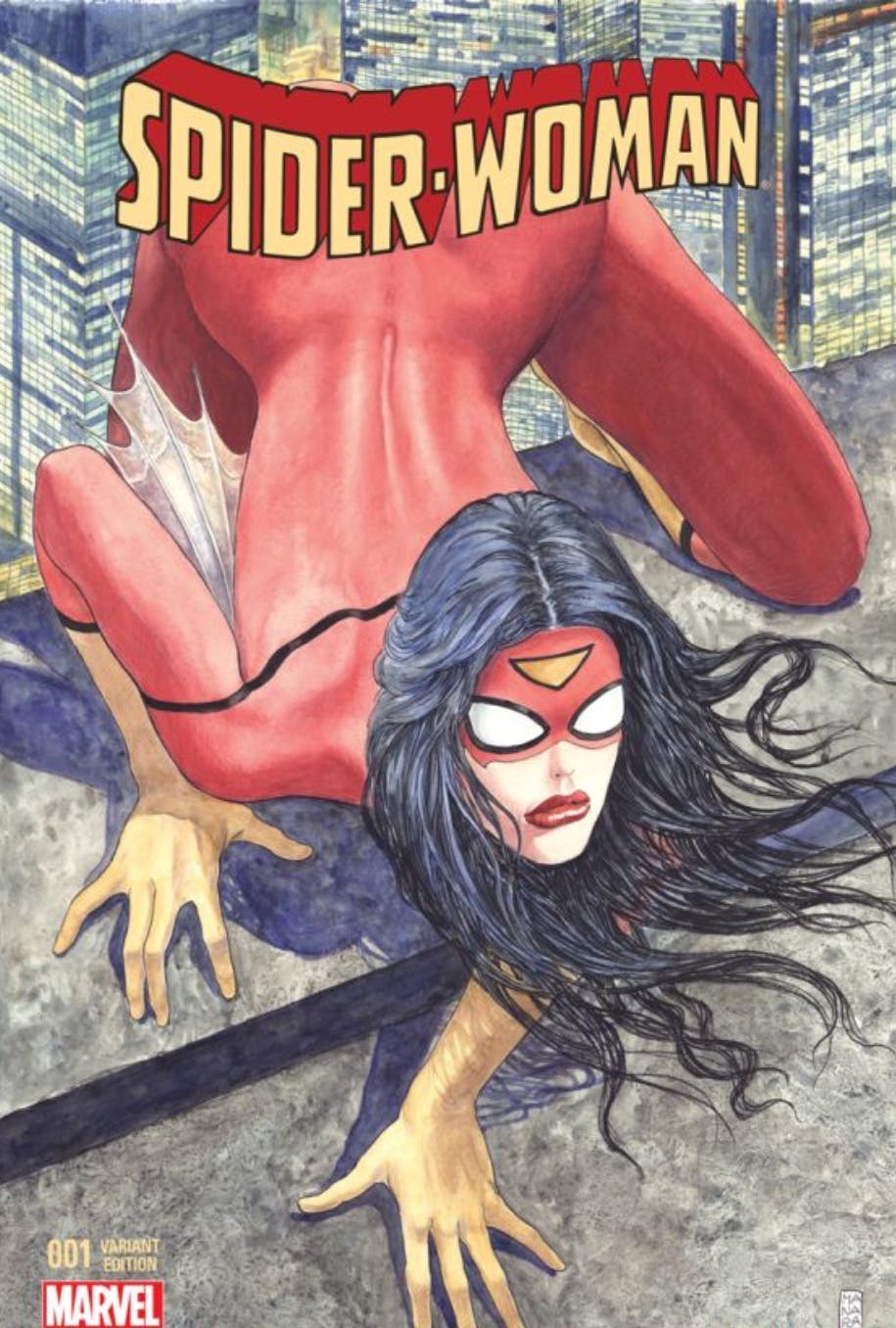 By Milo Manara, via Marvel Comics

Here’s the thing: That cover has nothing to do with the story. At no point is Spider-Woman down on all fours or even on a roof. The only thing that’s quasi-sexual is Jessica’s curve-hugging costume, which is standard issue for almost all of Marvel’s heroines. Even then, the outfit is tame when compared to those worn by Emma Frost and Illyana Rasputin.

That’s not to say Spider-Woman doesn’t have its fair share of problems. While most first issues are guilty of too much exposition, this book has absolutely none. That’s because it’s part of the Spider-Verse crossover event, which was preceded by the dimension-hopping Edge of Spider-Verse. Reading Spider-Woman was like turning on the TV and trying to watch a movie I’ve never seen from the midway mark. I was completely lost.

Spider-Woman abruptly begins with Jessica astride a lizard creature in some alternate reality. She’s riding through a purple sand desert toward a Manhattan carved out of gold. With her is another Spider-Woman named Silk and a steampunk-ish Spider-Man from the 1930s. Honestly, the only way this book could be any kookier is if Spider-Ham showed up (Note: he actually does in Amazing Spider-Man 9). 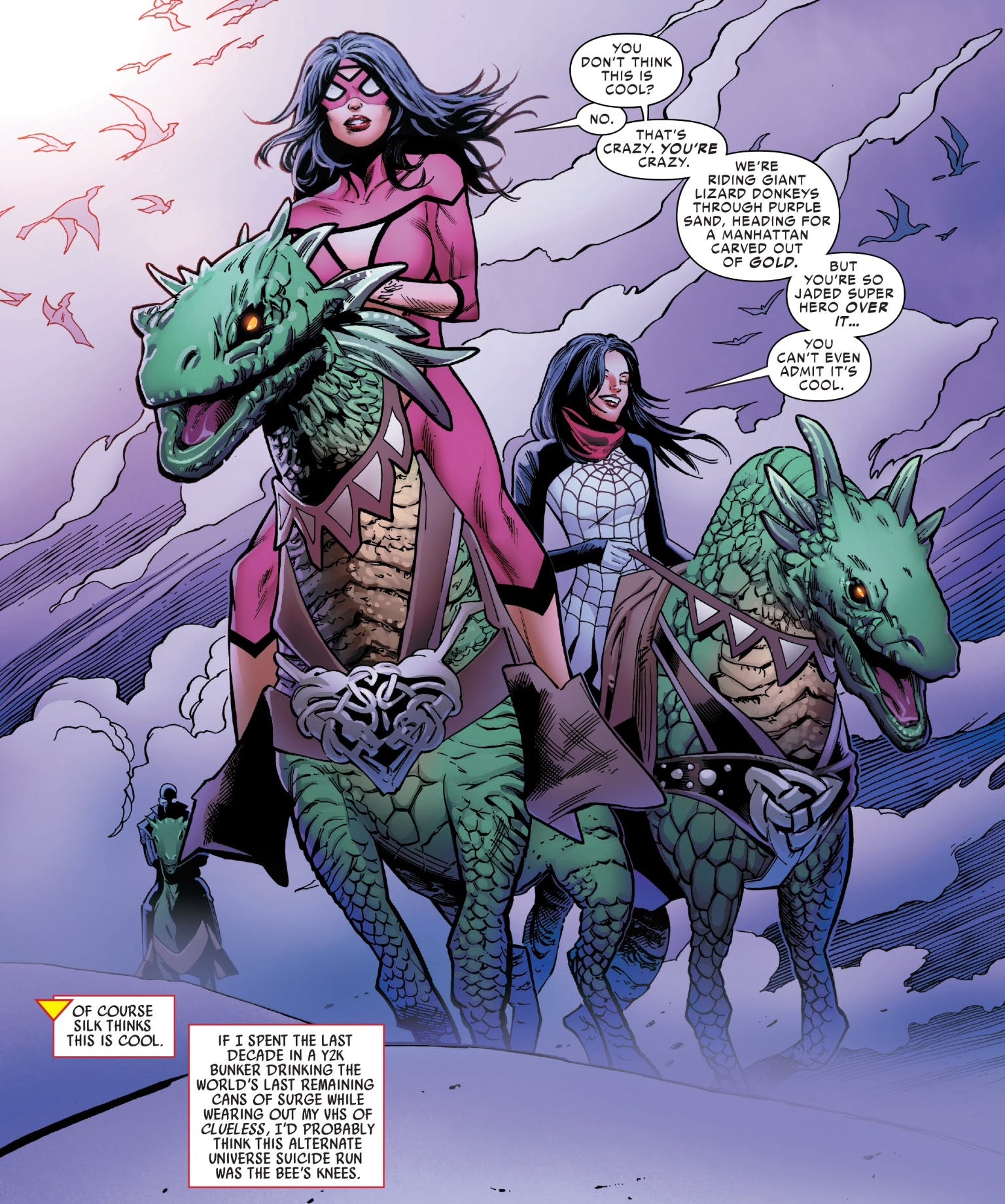 By Greg Land and Jay Leisten, via Marvel Comics

What follows are a couple of dust ups at a NYC-adjacent bedouin camp. First the heroes fight kids on hoverboards who stole a woman’s groceries, then there’s a battle with a teleporting villain who feasts upon Spidey people and looks like Lord of the Rings-era Orlando Bloom. Our band of heroes ultimately ends up not in the gleaming metropolis they were headed for, but hiding out in the storeroom of Felicia Hardy’s Jazz Age speakeasy several dimensions removed from where they started. 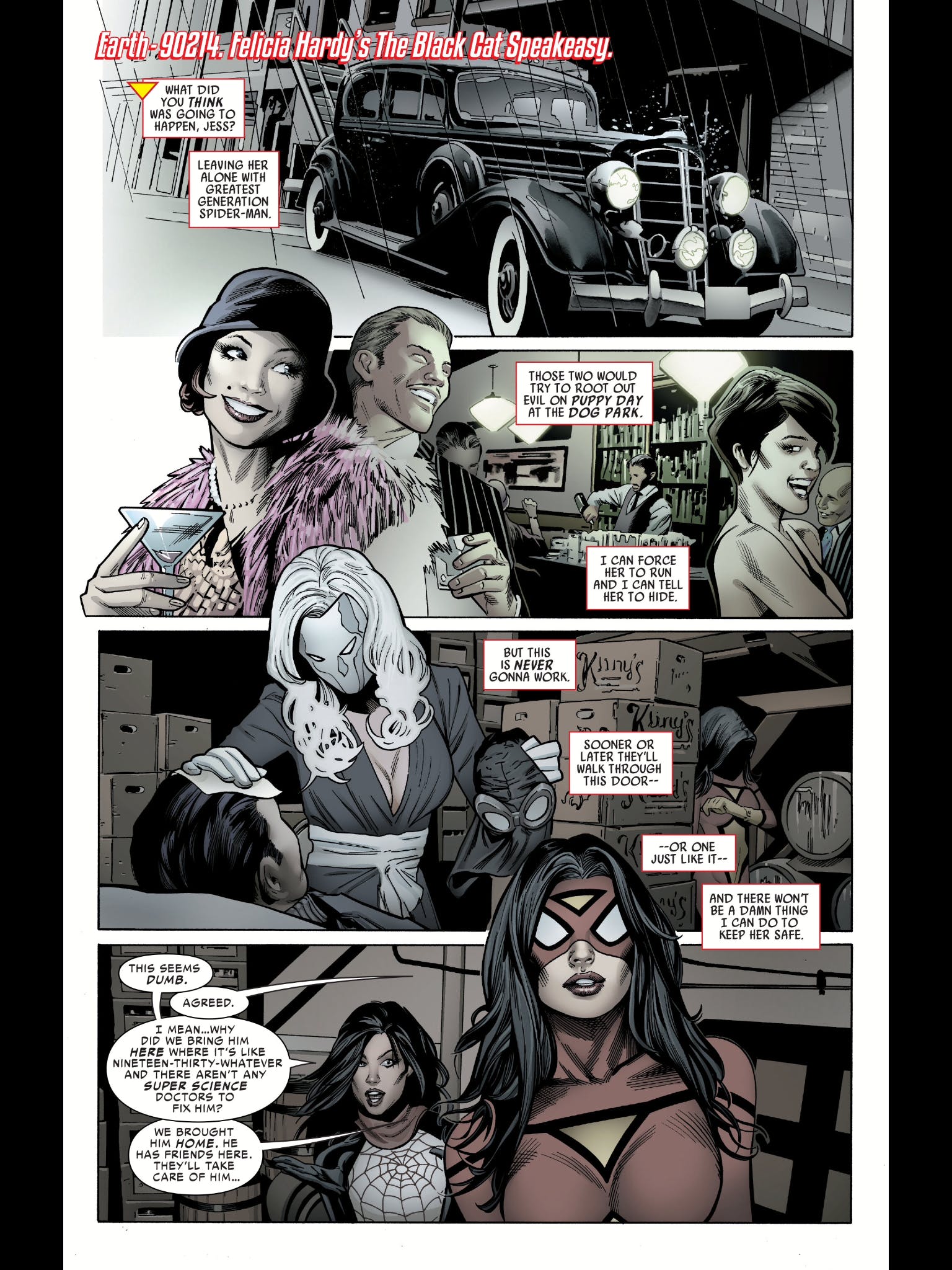 By Greg Land and Jay Leisten, via Marvel Comics

As the story unfolds—or unravels, depending on your point of view—Jessica is portrayed as a incredibly self-reliant woman, not the submissive hussy Manara’s art suggested. Writer Dennis Hopeless gives Jessica a punchy sense of humor, but also imbues her with a strong sense of purpose: protecting Silk from the Legolas wannabe by any means necessary.

Throughout the book Spider-Woman shows she’s one bad-ass arachno lady, truly deserving her own series. Just not this one. Marvel’s crossover events generally feel like decision-by-editorial-committee and I’ve seen them trip up some of the publisher’s best writers (see also: Rick Remender and Axis). I really enjoyed Hopeless’ run on Avengers Arena, so I’m not willing to pin this cluster of a book entirely on him. While the writing is lazy in parts and penciler Greg Land gets some of the details wrong, I can’t say my heart would be in this one either.

Images by Greg Land and Jay Leisten via Marvel Comics