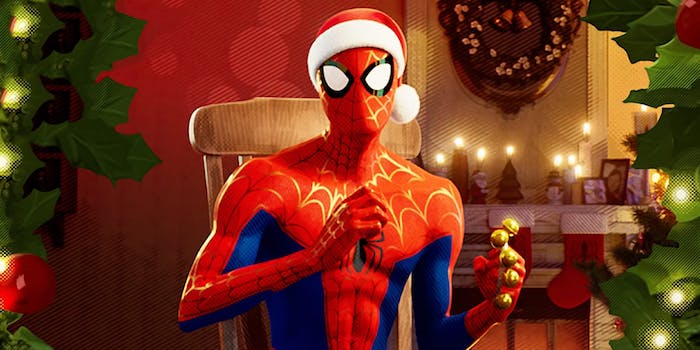 This post contains mild spoilers for Spider-Man: Into the Spider-Verse.

Out of the many, many surprising things about Spider-Man: Into the Spider-Verse, the fact that Chris Pine is the voice behind the Peter Parker from Miles Morales’ world might be one of the most delightful. And that reveal just became infinitely more delightful with the release of the Spider-Man Christmas album that was teased to us from the very beginning of the film.

We knew it existed, at least in the Spider-Verse. Peter Parker—who at age 26 was in his prime—touted it as part of being Spider-Man, but we also heard snippets of it on the desktop of the teacher trying to catch Miles for sneaking out of his dorm after curfew. Granted, none of the songs that appear on the infomercial for Spider-Man’s Christmas album exist, at least that we know of. But Sony has done one better with the release of A Very Spidey Christmas, a five-song EP that brings you holiday cheer from four separate Spider-People.

A Very Spidey Christmas, which includes songs from Miles Morales (Shameik Moore), Peter Parker (Pine), and Peter B. Parker (Jake Johnson), is a collection of webby and self-aware remixes on classic Christmas songs. “Spidey-Bells (A Hero’s Lament),” which we first heard during the credits of Into the Spider-Verse, reveals that being Spider-Man isn’t always everything it’s cracked up to be, even for the Spider-Man who excels at it. His other entry, “Up on the House Top,” is much more conventional.

In “Deck the Halls,” Johnson paints Peter B. Parker as a reluctant lounge singer while in “Joy to the World,” Miles Morales reveals the painful reality of being Spider-Man: as fulfilling as it might be, it doesn’t pay and it’s expensive to make all of that web fluid. (He even made a GoFundMe for it.) And topping it off is a Spider-themed rendition of “The Night Before Christmas” narrated by Jorma Taccone, who voices Spider-Man of Earth-67 in the post-credits scene.

You can listen to the entire album below.