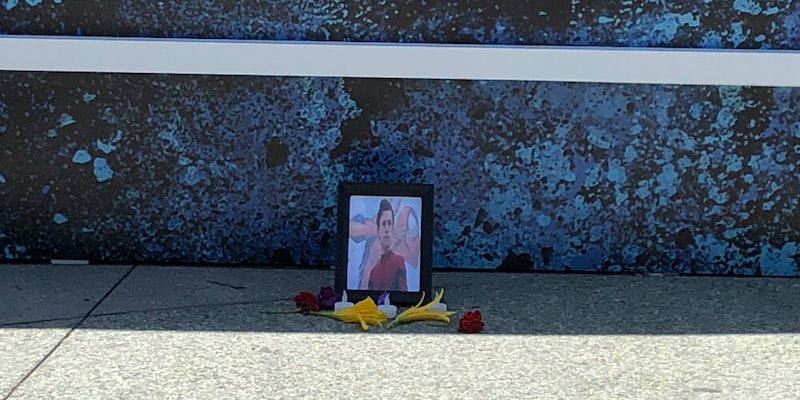 Someone set up a Spider-Man memorial outside D23 Expo

Fans are mourning the departure of Tom Holland's Spider-Man from the MCU.

A makeshift memorial for Spider-Man popped up outside of Disney’s D23 Expo in California this week, as fans continue to mourn the web-slinger’s departure from the Marvel Cinematic Universe.

The memorial consists of a framed picture of Tom Holland’s Spider-Man surrounded by candles and flowers. It was spotted outside the Anaheim Convention Center and posted to Twitter in video form.

SOMEONE LEFT A SPIDER-MAN MEMORIAL OUTSIDE OF D23 IM YELLING pic.twitter.com/kgXYHFg6aL

The tweet received tens of thousands of retweets, more than 2.2 million views, and comes just days after fans learned that Marvel would be parting ways with the Sony Pictures-owned franchise.

The decision means that Holland’s version of Spider-Man will no longer be part of the MCU–and supporters aren’t happy about it.

Fans of Spider-Man and Holland, who attended D23, complained to BuzzFeed News about the loss of one of the world’s most beloved superheroes.

“They’re just being two kids fighting over money, when they could just come together and make something great,” one fan said of the dispute between Disney and Sony.

Twitter users responded to the memorial and their own despair in exactly the way you’d expect in 2019: through memes.

Holland, who was in attendance at D23 to speak on a panel for his upcoming film Onward, offered words of support to his supporters.

“Basically, we’ve made five great movies,” Holland told Entertainment Weekly at D23. “It’s been five amazing years. I’ve had the time of my life. Who knows what the future holds?”

The actor further stated that he intends to continue playing Spider-Man even if his character won’t be alongside his fellow Marvel superheroes.

“It’s going to be so fun, however we choose to do it,” Holland added. “The future for Spider-Man will be different, but it will be equally as awesome and amazing, and we’ll find new ways to make it even cooler.”

Whether Disney and Sony will ever come to an agreement remains to be seen. Sony did, however, release a statement earlier this week, noting that it was “disappointed” by Disney’s decision.

“Much of today’s news about Spider-Man has mischaracterized recent discussions about Kevin Feige’s involvement in the franchise. We are disappointed, but respect Disney’s decision not to have him continue as a lead producer of our next live action Spider-Man film,” Sony wrote on Twitter.

Much of today’s news about Spider-Man has mischaracterized recent discussions about Kevin Feige’s involvement in the franchise. We are disappointed, but respect Disney’s decision not to have him continue as a lead producer of our next live action Spider-Man film. (1/3)