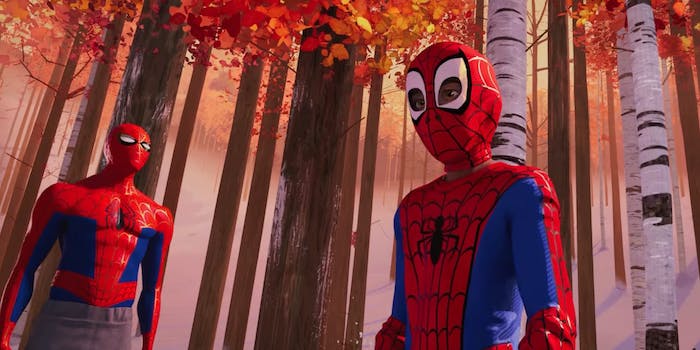 ‘Spider-Man: Into the Spider-Verse’ trailer bridges the gap between Spideys

We’ve seen three different iterations of Spider-Man on the big screen, but the new trailer for Sony’s Spider-Man: Into the Spider-Verse gives us what might be its most vibrant and varied Spidey portrayals yet.

With Miles Morales (voiced by Shameik Moore of Dope and The Get Down) at the center and Peter Parker (New Girl‘s Jake Johnson) serving as an eclectic mentor for the young Spider-Man, Spider-Man: Into the Spider-Verse already revamps the kind of story we already know with a comic fan favorite. Miles inherits a brand-new story, new characters, and unique challenges that Peter didn’t have to face when he first donned the mask. And Peter has plenty of wisdom for the teenager who will one day follow in his footsteps.

The color and animation style works in its favor, giving you the impression that Miles and Peter are literally leaping off the comic book page; it’s vastly different than anything we’ve seen.

And with a cameo from another distinct comic character at the end, the possibilities of that Spider-Verse are endless. But if that’s enough to blow Miles’ mind, just wait until he reaches Comic-Con.

Spider-Man: Into the Spider-Verse will swing into theaters Dec. 14.