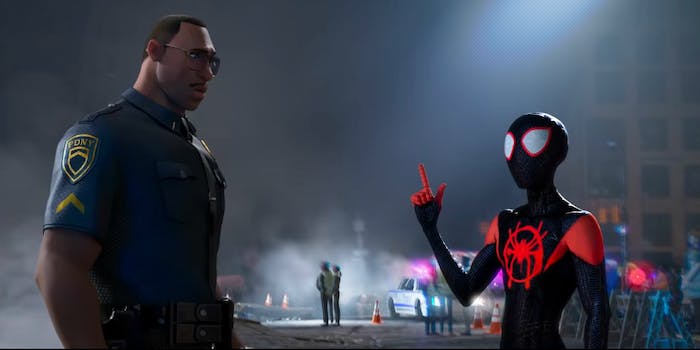 You can read the ‘Spider-Man: Into the Spider-Verse’ script online for free

It's a special treat for fans.

Co-writer Rodney Rothman tweeted out the link on Saturday.

Sony was kind enough to make our #Spiderverse script available online. Here it is if you're interested. https://t.co/CO2EQCKdD3

It’s pretty impressive just how much of the zany style of something like Spider-Man: Into the Spider-Verse gets illustrated in plain text.  A great example can be found on just the second page: “Spider-Man WINKS. Man, he’s cool.”

Unfortunately, the script is missing one of the funniest bits (the “BAGEL!” when Miles Morales tosses a pastry at a scientist’s head), but that’s more of a sight gag anyway.

Spider-Man: Into the Spider-Verse is still in theaters, but having the script on-hand has some folks on Twitter experiencing a rush of emotions, like Spider-Noir gazing into a Rubix cube.

Of course, there’s the unintentionally touching scene with the late Stan Lee in the costume shop.

STORE OWNER
We were friends you know.

MILES
Can I return it if it doesn’t fit?

Beat. Stan head tilts to a sign: NO RETURNS. He smiles. pic.twitter.com/u6ZGBrZpMc

Then there’s just the general excitement over having access to such a cool piece of cinema storytelling.

This exchange between Rothman and a fan is particularly nice. The fan notes that his friend has discouraged the use of smash cuts (abruptly jumping from one scene to the next) in scripting, only to see Rothman and Miller employing it constantly throughout their own work. Rothman is quick to note: “I’m sure there’s lots of stuff in there that was supposed to be bred out of us by now. I just go with whatever best expresses the feeling I’m looking for.”

Friend: You should take SMASH CUT out of your scripts. No one in the industry uses it.

The first thing I notice in this script is a smash cut, and I felt /so much/ validation as a screenwriter lol.

Im sure there’s lots of stuff in there that was supposed to be bred out of us by now. I just go with whatever best expresses the feeling I’m looking for.

If you’re interested in other Spider-Man: Into the Spider-Verse paraphernalia, you can listen to the entire Spider-Man Christmas album that you hear in the film’s intro sequence. You can also check out Daily Dot’s interview with production designer Justin K. Thompson to learn how they brought the movie’s eye-popping animation to life.