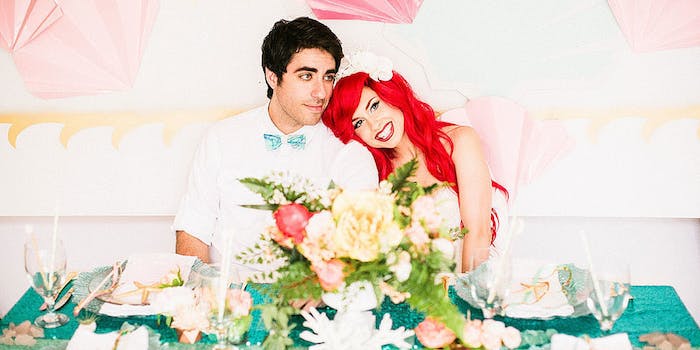 You may now kiss the girl.

Now, she’s teamed up with a small army of designers, vendors, and photographers to produce the ultimate Little Mermaid photoshoot, featuring a fantasy wedding with Hines as Ariel and fellow YouTuber Leo Camacho as Prince Eric.

The epic wedding photoshoot, which can be seen at Popsugar in all its maritime spectacle, involved more than 20 different vendors and six fellow YouTubers as Ariel’s sisters-turned-bridesmaids. Naturally, it took place on the beach, complete with delicious edible seashells. The photoshoot, done by Mark Brooke Photography, is dreamy enough to woo Disney fans and cynics alike. I mean seriously, just look at that cake. You can see all 101 photos from the epic shoot over at Popsugar.

Photos by Mark Brooke Photography and Mathieu Photo via Popsugar