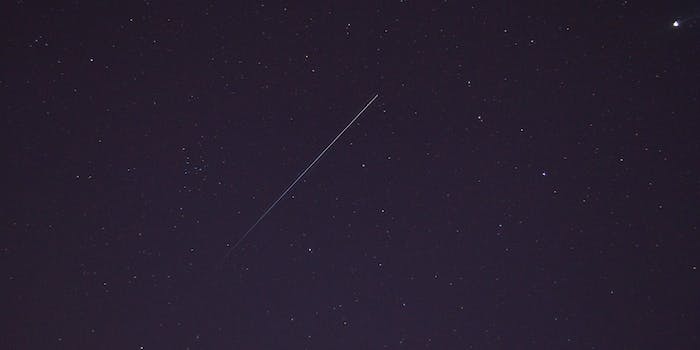 ‘UFO’ photographed by amateur astronomer turns out to be SpaceX rocket

On Tuesday evening an amateur astronomer captured an extraordinary photo that had him scratching his head. Three bright lights appeared in the night sky—actual unidentified flying objects.

Curious, he posted a photo to the astrophotography subreddit titled, “Please help me identify this, for lack of a better term, ‘UFO.’ Did I see a triple Iridium flare, or some other satellite formation?” 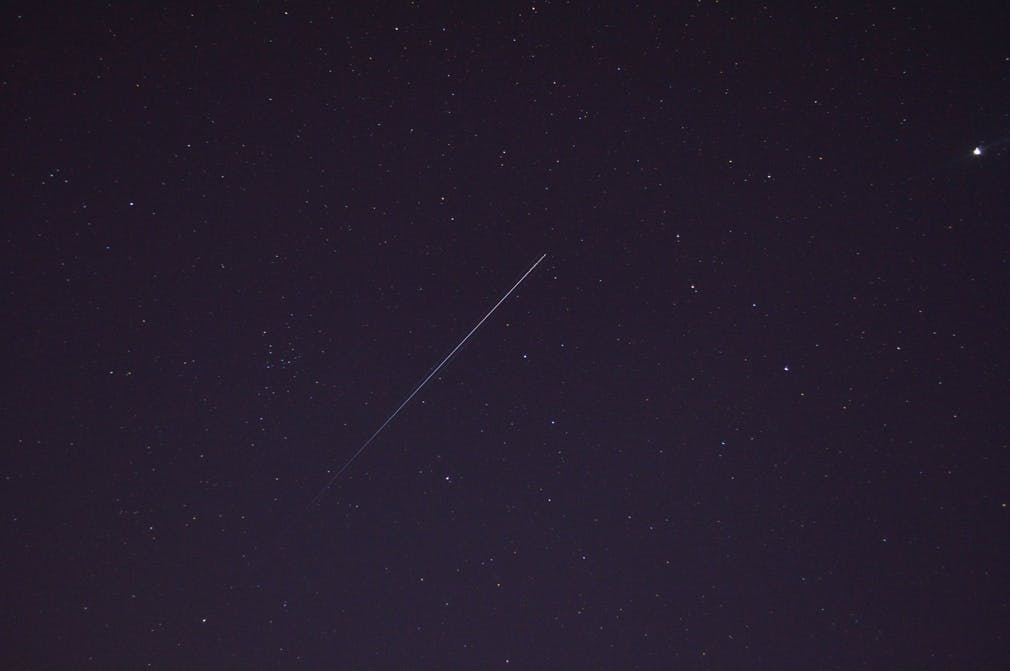 “So last night I headed into the country to play around with my new DSLR. As around 21:22 (14/04/2015; Outside Bristol, UK) I saw one of the strangest sights I have ever seen whilst stargazing. There were three bright lights in a straight line moving across the sky like an Iridium flare/ISS. I immediately looked through binoculars and it obviously was not a plane. I then very quickly spun my camera around on the tripod (hence why the start of the exposure is wobbly) and captured a 30 second exposure. The bright one in the middle was easily as bright as the ISS (which I had watched pass over about 40 mins prior). The lights either side were about half the brightness. You can see from the picture that they fade out towards the end of the exposure (exactly like an Iridium Flare). However, I have never seen an Iridium flare last for so long. Can you help identify this very strange phenomenon? The three lights were in a perfect line. It was potentially one of the most interesting astronomy things I have seen with the naked eye. I know it obviously was some sort of satellite flare, but it did get the adrenaline pumping. I feel lucky to have captured this on film. Any ideas/ answers will be much appreciated.”

In a matter of hours, Redditors determined that the image wasn’t of an Iridium flare, but instead the SpaceX Dragon. The private space exploration company launched a Falcon 9 rocket from Cape Canaveral, Fla., Tuesday in a two-stage mission. Stage one delivered cargo to the International Space Station, and stage two attempted to safely land the Falcon 9 booster rocket on a floating barge so it could be recovered and used again. Stage one was a success, but unfortunately the booster rocket landed too hard on the barge and was lost.

This is the second attempt by SpaceX to safely land a rocket booster, which normally burns up in the atmosphere after launch. Company founder Elon Musk says he wants to master recovering rocket boosters so they can be reused and thereby cut costs involved in space travel.

Lee just happened to be in the right place at the right time to see the rocket ascend. He told the Daily Dot that astronomy is a long-time passion of his. “For the last year I have just been taking photos through my telescope with my smartphone, and was able to get some pretty good shots,” he said in an email. He said recently purchased a better camera to get wide-angle shots.

“I was so excited to find out today that I had taken a picture of rocket, which was flying over my head… incredible really,” Lee said. He wasn’t sure if he would have ever found out what the object was without Reddit’s help. He was so thrilled that he even wrote a celebratory poem:

“Last night I unknowingly took an incredibly fluky photo…
It’s of the SpaceX ‘dragon’ flying over UK skies;
It was heading up to the ISS with scientific supplies.
At the time I had absolutely no idea what I was seeing,
Knowing it was a rocket improves my mental well-being.
This is just one of the reasons I love astronomy;
I headed out for star trails and a rocket flew ovver-me!”