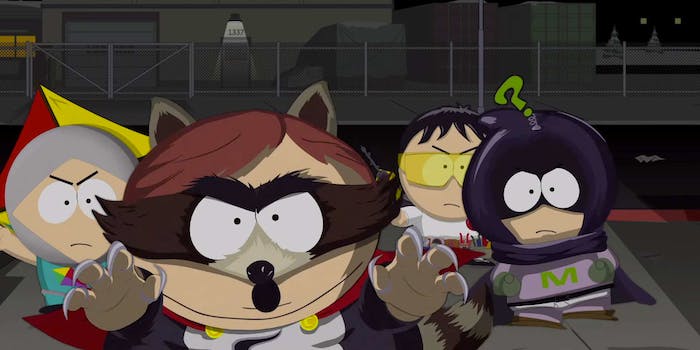 Another extended episode of South Park will be transposed onto the video game world.

Matt Stone and Trey Parker said they’d never, ever make another video game after South Park: The Stick of Truth.

Lucky for us, they just proved themselves wrong.

Stone and Parker joined Aisha Tyler on the stage at Ubisoft‘s E3 2015 press conference this afternoon to explain why South Park: The Fractured but Whole is in the works despite their complaints during the development of the first game.

“The big thing is we’re kinda whiny babies,” Parker said, “and we realized just at the end of Stick of Truth, we kind of learned how to make video games and it was kind of too late. We were like, ‘Well, fuck. Now we know how to make a good video game.’ So we have the template to do it, and we thought, ‘Fuck it, let’s do it.'”

The trailer revealed today for The Fractured but Whole shows a second helping of an adventure game that looks just like a television episode of South Park.

Considering that Stick of Truth was nominated for awards at the 2015 Game Developers Conference, where the most prestigious awards in the video game industry are handed out, making a second South Park video game was probably a good idea.