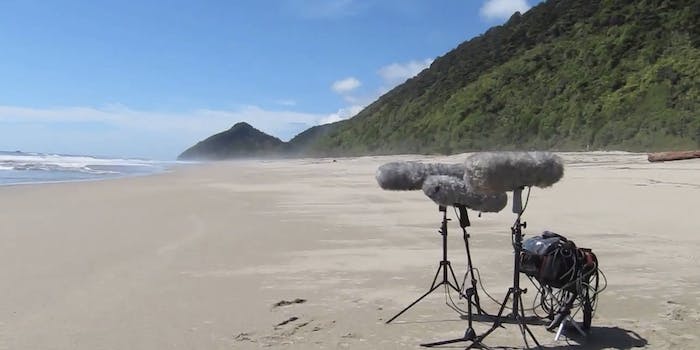 Here’s how you can listen to the entire planet

Welcome to the field of soundscape ecology.

Listen. What do you hear? Car horns, footsteps, a scolding squirrel, and trash cans bumped around by garbage collectors? Or crickets and a meadowlark outside the window mingling with the soft whir of your laptop fan? All those ambient noises make up your local soundscape—the combination of sounds in the environment.

Animals make a fascinating, even alarming, array of sounds. Weather, earthquakes and other natural phenomena have their own music. When you throw humans into the mix of the Earth’s noisemakers, soundscapes can get pretty information-rich.

Scientists actually study these soundscapes because they offer a way to catalogue the planet’s biodiversity as well as humanity’s effect on nature. Take Bryan Pijanowski, who has recorded soundscapes in the jungles of Borneo, the Sonoran desert, and has recently set up sensors in Indiana, according to a recent article on The Verge.

Pijanowski is a soundscape ecologist at Purdue University. His projects are unique and rather interesting. For example, he called upon volunteers to record a few minutes of their local soundscapes earlier this year using their smartphones. To appreciate his work using what might be his favorite sense, listen to these cicadas in Borneo:

Or this recording from Costa Rica:

Soundscape ecology and the related field of bioacoustics are small but growing areas of research. One influential soundscape pioneer, Bernie Krause, was a musician turned wildlife acoustician who tagged along with scientists in the field before making his own contributions. In 1989, Krause recorded the soundscape of a forest meadow in the Sierra Nevadas before and after logging. Alarmingly, the latter recording is almost silent, but in The Verge article, Pijanowski explains that it could have been the season or other factors—without comparison to a similar, unlogged section of forest we will never know.

Dzieza’s story is lively and there’s more to this science than what you’ve read here. Take a gander:

As he sat in jungles and deserts around the world, Krause noticed that the sounds he heard could be surprisingly orderly. Different species seemed to occupy their own place in the sonic spectrum. Insects in Borneo might stridulate loudly at a middle frequency, alternating so as not to drown each other out. Birds rise above it by calling at a higher pitch, and birds with shorter calls fit in-between the calls of birds with longer ones. Frogs puncture the droning insect noise with short, loud bursts, and mammals take the bottom frequencies. Organisms, Krause hypothesized, evolved to partition acoustic bandwidth, calling out at different frequencies and at different intervals to be heard over one another. Animals would also have to evolve to be heard over sounds like thunder, wind, and rushing rivers—sounds that Krause, working with ecologist Stuart Gage, called geophony.

One happy side effect of this kind of research is that from the comfort of your home you can listen to sounds from around the world. The Cornell Lab of Ornithology Macaulay Library has a dizzying array of wildlife recordings and videos. You can listen to (and see) whale song in the Ocean Conservation Research Sound Library. There is an impressive list to delve into.

Mix up your own soundscape from Lisbon, Portugal. Or enjoy the ambient noises of London, England. Explore wild soundscapes at the Wild Sanctuary’s Audio Archive—but note that half of the audio you experience there is from habitats that no longer exist, have been radically changed by human activity or have gone silent.