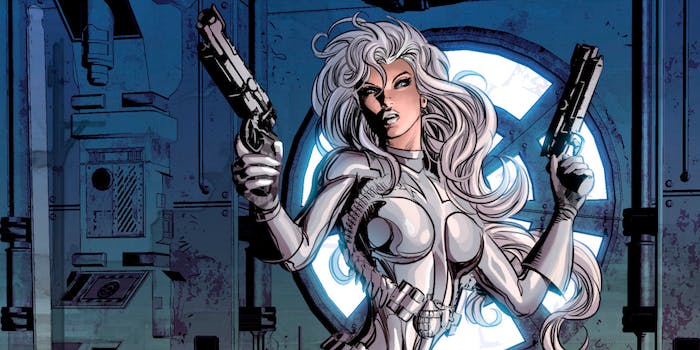 Photo via Amazing Spider-Man: The Lady In Silver/Marvel

This will be Sony's first female-led superhero movie.

We’ll say one thing for Sony‘s Spider-Man franchise: It’s ambitious. With Spider-Man: Homecoming on the way, the studio is working on a spinoff about Black Cat and Silver Sable.

The spinoff follows plans for a Venom movie, following the symbiotic supervillain who bonds with a human host. Silver Sable (a mercenary) and Black Cat (a cat burglar and definitely not a Catwoman ripoff) suggest a darker tone than Spider-Man, one of Marvel’s more wholesome heroes.

This will be Sony’s first female-led superhero movie, although some fans will surely wonder why Sony didn’t choose Spider-Woman or Gwen Stacy instead.

According to the Hollywood Reporter, Chris Yost (Thor: Ragnarok) is writing the script, redrafting a version by Westworld‘s Lisa Joy. The studio hasn’t hired a director yet, but they’re supposedly hoping to start filming this year.

Sony has the film rights to Spider-Man and related characters, but no one else from the Marvel pantheon. This means they have to assemble an Avengers-style franchise from some fairly obscure characters. But if Suicide Squad can win big with a Z-list team, then why not Black Cat and Silver Sable?