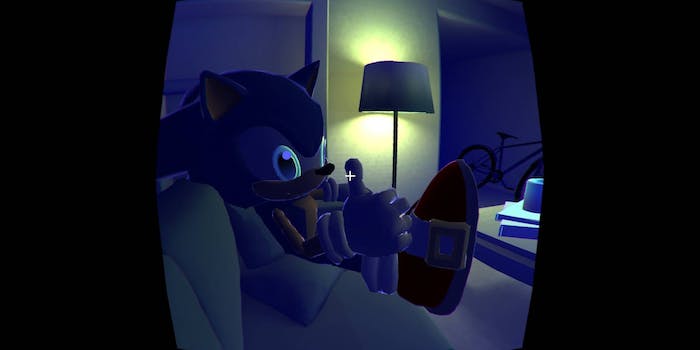 These minigames are a Sonic fan’s worst nightmare

The Arcane Kids have put together four Sonic minigames, and each is absolutely absurd.

There’s a lot of really bad Sonic the Hedgehog fan art on the Internet. But this takes hyper-weird Sonic renditions to a whole new level.

Sonic Dreams Collection is a collection of minigames made by the Arcane Kids, an IGF nominated studio that brought the world Bubsy 3D and Room of 1000 Snakes.

Arcane Kids posits Sonic Dreams Collection as four playable prototypes found on a Sega Dreamcast developer kit bought on eBay. In an act of defiance toward Sega for not releasing these gems, the Arcane Kids have exposed the games to the public.

The collection includes four games. Make My Sonic is exactly what it sounds like. You are in a character editor and can create your vision of Sonic the Hedgehog. Of course, once you start pulling limbs, things get wacky. The second game is Eggman Origin which takes your bastardized version of Sonic and essentially throws him into purgatory.

Sonic Movie Maker and My Roommate Sonic are by far the best. Both are absurdly weird, mildly sexual, and nightmare inducing. We won’t spoil anything for you, but highly suggest you experience it yourself. It would also be best to avoid looking up videos on YouTube.

The biggest question is why? Why would the Arcane Kids make this frankenstein monstrosity of a rabid Sonic fan’s worst nightmare? Considering the studio’s website looks like something Homer Simpson would create, Sonic Dreams Collection was most probably made for, as many on 4chan would say, teh lulz.