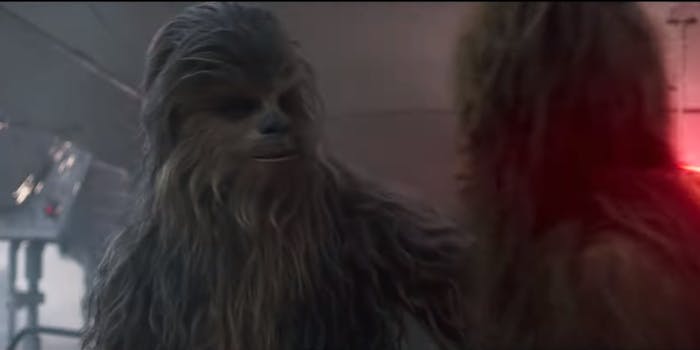 Who is the other Wookiee in the new ‘Solo’ trailer?

Could this be Chewie's wife from the 'Star Wars Christmas Special'?

There’s a new Wookiee character in the latest Solo trailer, and Star Wars fans are very curious about who it is.

This Wookiee appears in a brief scene with Chewie, embracing with their foreheads together. Is it an old friend? A relative? Girlfriend, boyfriend? Chewie had a wife called Mallatobuck in the infamous 1978 Star Wars Holiday Special, so she’s a popular choice. But at the risk of sounding space racist, it’s kind of hard to tell Wookiees apart. We only have a view from the back, so this could really be anyone.

As Mashable points out, some fans are very excited about the possibility of this being Mallatobuck. She joined the modern Star Wars canon with a 2015 children’s book retelling of A New Hope, so she’s free to appear in this movie. On the other hand, we should be wary of interpreting this body language as romantic. Wookiees are more physical than humans, and a head-touch doesn’t necessarily mean they’re dating.

Chewbacca got blonde streaks and is out there breaking Lady Wookie hearts in his younger days like a 90s boy band frontman. pic.twitter.com/DxPrdqL7hc

While Chewie is by far the most prominent Wookiee in the franchise, this isn’t the first time we’ve met other Wookiees. Yoda visits the Wookiee homeworld of Kashyyk in Revenge of the Sith, fighting alongside Wookiee warriors against Palpatine’s troops. Chewbacca actually participated in the battle, at this point a mere 180 years old. After that, he left Kashyyk and embarked on a series of adventures with non-Wookiee characters, and we know surprisingly little about his personal relationships until he partners up with Han.

Disney hasn’t announced a Wookiee character among Solo‘s secondary cast, so we’ll have to wait and see whether this is a tiny throwaway scene or a more significant character that the studio decided to keep under wraps.