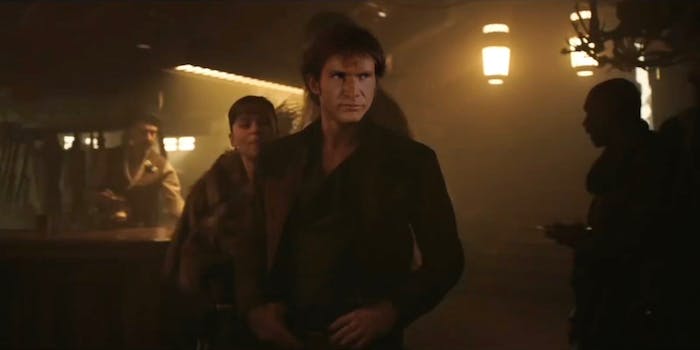 Someone edited Harrison Ford’s face into the ‘Solo’ trailer

Star Wars fans have had months to get used to the idea of a Han Solo movie without Harrison Ford. But not to be deterred, one die-hard fan put the 75-year-old actor right back into the thick of the action—with jarring results.

The edit from Nick Acosta, who titled his video “True Solo,” pastes a young Ford’s face over top of Solo: A Star Wars Story actor Alden Ehrenreich’s in scenes from the most recent trailer. He also mixes in a few scenes from earlier works for good measure. It’s not the first time Acosta’s done something of this nature, but while some of his previous work brings casts together, this one just swaps one actor’s face out for another.

“I couldn’t help wonder what would this movie would look like if you could magically transport a young Harrison Ford to play his iconic character,” Acosta wrote in the video description. “So using a variety of digital compositing software and some editing tricks I tried to make that happen.”

The end result is a bit of an uneven mess. While some shots work, they’re almost immediately followed by shots that don’t, so rather than being immersed in “what could have been,” you’re just distracted by the mix of uncanny valley and odd editing choices. (Plus, Ford is a full 4-inches taller than Ehrenreich, creating a noticeable difference in some scenes.)

And no matter how well Ford is edited in, the voice shatters the illusion—but also don’t be surprised if we end up seeing a full-blown Solo fan cut with a similar edit in a few weeks or months.