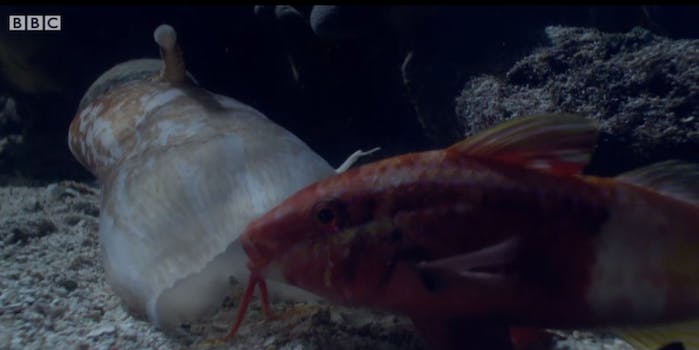 Don't go in the water.

The subreddit /r/thalassophobia (fear of the sea) is usually pretty tame. It’s a hub of weird sea creatures and images of the vast, blue abyss. For the non-thalassophobic, it’s a pretty good time. But last night something truly terrifying emerged from its depths:

The GIF is a clip from a BBC documentary, the home of any good natural horror show.

According to the video’s narrator, the cone snail sniffs out its prey in the night while they’re sleeping. Then it extends its huge mouth-like thing (proboscis) to release chemicals to stun the prey, engulfs it, and then “puts it out of its misery” by stabbing it with a venomous harpoon. (That’s the part with all the thrashing.)

An article accompanying the video on the BBC’s website said that there are 640 known species of cone snail, and each of them carry an average of 100 toxins, most of which are unique. “Their nerve-blocking chemical cocktails have triggered a great deal of interest in the cone snail in the field of biomedical research,” the BBC said. Scientists think they can harness their toxins to create new painkillers and treatments for Alzheimer’s, epilepsy, and Parkinson’s.

The article went on to talk about the importance of protecting the snails’ habitats around the Philippines, Papua New Guinea, and Australia. And in case people need extra incentive, “Conus geographus [the species in the gif] is thought to have caused at least 30 human deaths; a person has about a 30 (percent) chance of surviving if stung.”