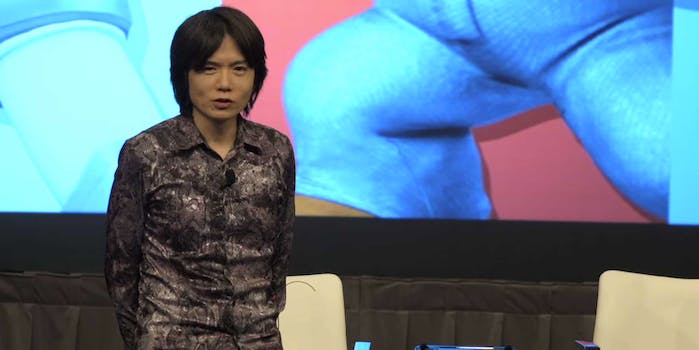 Why Masahiro Sakurai’s retirement might be good for Smash Bros.

It's time for a new generation of developers to take the reins.

It’s looking like the latest Smash Bros. for Wii U and 3DS will be game director Masahiro Sakurai’s last project with the franchise. His retirement, however, may not be such a bad thing.

In the January issue of Game Informer, which is on store shelves now, Sakurai made it pretty evident that he’s ready to move on. When asked if there would be a sequel to the latest game, he couldn’t “deny the chance for another” but “for myself, I don’t think there will be.”

This left many fans online worried about the future of the series. As much as Sakurai should be lauded as a visionary, though, it would be best to not put him on such a high pedestal. Doing so could make it impossible for him to be replaced.

When he does officially exit the series, Sakurai should be wary of the vicious loop another celebrated game creator finds himself in.

This interview came to light in 2012, but in Metal Gear Solid 2, Solid Snake gives a statement that’s a thinly veiled message to his development team. “We’re all born with an expiration date. No one lasts forever. Life is nothing but a grace period – for turning our genetic material into the next generation. The data of life is transferred from parent to child. That’s how it works.” Kojima did just that with Metal Gear Solid 3: Snake Eater, and distanced himself from the project. “The team did actually start working on MGS3, but unfortunately there were problems and it didn’t go well, so I was forced to come back and work on it.”

Both game studio Konami and Kojima did not want the first game under new leadership to be a failure. For that reason, Kojima was thrown back onto the project and finished it, hoping it would be his last. Kojima is still with the Metal Gear Solid series, and is working on the new Metal Gear Solid V: The Phantom Pain set for release next year. Likewise, a new Smash Bros. created by a team not led by Sakurai could be risky, but sometimes it’s that risk that forces the younger team to grow and make something great.

One such example of handing a game to a new team altogether would be the Metroid series. Metroid had been in Limbo since the release of Super Metroid on the Super Nintendo back in 1994. Nintendo skipped out on creating a Metroid game for the Nintendo 64, and was in search of a new team to take on the space bounty hunter. Eventually Nintendo landed on Austin-based Retro Studios. The team was still very young and had only a few prototypes to their name. The talent was there, however, and Nintendo spotted it. It gave Retro the greenlight to create a first-person adventure starring Samus Aran.

Then came 2002’s Metroid Prime, a game that shattered all expectations. Even now, it’s considered one of the best games ever released. Of course, in the same vein, there are also examples of games being given to new teams, and failing to meet expectations. One of these tragedies was Metroid: Other M, created by Dead or Alive’s Team Ninja. The game was mixed critically, and did not meet sales expectations for Nintendo. Fans felt that Team Ninja’s Samus was a sacrilegious bastardization of the beloved character. She was stripped of all of her independence and bad-assness and turned into a whiney girl with daddy issues. Many refuse to consider Other M as part of the series’ canon.

Nintendo knows that its great directors, such as Shigeru Miyamoto and Eiji Aonuma, won’t be around forever. One day they will retire. The outgoing leaders need to start training younger staff to one day take the responsibility of bringing the world another great Mario or Zelda.

Before Nintendo hands over the reins of its biggest franchises, though, the rookies have a lot to prove. Nintendo has been giving its younger team’s projects, such as Splatoon and the recent Captain Toad: Treasure Tracker, directed by Kenta Motokura and Shinya Hiratake.

Both are relatively new employees at Nintendo, and by relatively, we mean they started in the early 2000’s. Even then, their roles were smaller. Motokura worked as a character designer and Hiratake as an assistant game designer. Eventually they worked their way up and were given the greenlight to make Treasure Tracker. For Nintendo, it was a smaller project, one that didn’t need to be a full $60 game. It was also a proving ground for the new directors. Given our review, we definitely enjoyed their fresh spin. It’s the same idea with Splatoon. A game that’s being made by a younger team, and as Miyamoto stated in an interview with Mashable:

“They’re all very young team members for us, so they’re very energetic…it’s allowing me to not be heavily involved in the project — they’re able to work on their own.”

Bringing in new people and fresh ideas is important for any company. When a company relies too heavily on its older staff and design philosophy, it has the potential to stagnate.

At a company as steeped in tradition as Nintendo, the transition to fresh thinking has to come in measured steps. When directors like Kojima, Miyamoto, or Sakurai leave, there will be immense pressure on the development team to maintain the old directors’ visions. But that’s a fine line to walk—products may come out as weak imitations if they fall short. A glaring example of this is Dark Souls. The first Dark Souls was directed by Hidetaka Miyazaki. The mechanics were dense, and the game was unforgivingly difficult. That difficulty was not meant to be difficult for difficulties sake, but to make the game more interesting. Gamers reacted positively to its raw design and the feeling that it was punishing, but fair.

While Miyazaki did not direct the sequel, Dark Souls 2, the team on the follow up was so in awe of his original vision they simply imitated it. Though the game was critically loved, it was criticized by some of its core fans who felt Dark Souls 2 was difficult for difficulties sake, a crucial disconnect.

While there are clear pitfalls in giving a game franchise to a new team, one way or another that time always comes. Sakurai has to leave Smash Bros. just for his own health and sanity. Super Smash Bros. Melee, still regarded as the best game in the franchise, nearly killed the man. In an interview with Famitsu, Sakurai “worked on that game for 13 months straight…without a single Sunday or holiday off that whole time.” That sacrifice did create what he thinks is “the sharpest game in the series.”

Regardless, he had no plans to commit his whole life to Smash. He actually had no idea that he was making the sequel until E3 of 2005 when the Wii, codenamed Revolution, was announced. President of Nintendo, Satoru Iwata, stated that HAL Laboratories would be making the new Smash for the Revolution. This surprised Sakurai considering he left the company in 2003. After the conference, Iwata invited Sakurai to his hotel room where he expressed great interest in Sakurai coming back.

With Brawl, Sakurai stepped back from the intense development schedule, and it definitely showed in the final product. The game’s design had some pretty major flaws. The gameplay was overly defensive, characters had balancing issues, and it was deliberately anti-competitive.

Still, near constant Smash Bros. development since the ’90s has been incredibly taxing, especially with the immense pressure and expectations. Sakurai’s strong influence over the series has been both a blessing and a curse. On one hand, players were given the brilliance that was Melee, but on the other, the competitive scene suffered due to Brawl.

It can become suffocating to have all that weight on one’s shoulders. Sakurai has given enough of his livelihood to the franchise. It’s time to hand it over to a new director. Who knows—it may produce the best Smash Bros. yet.