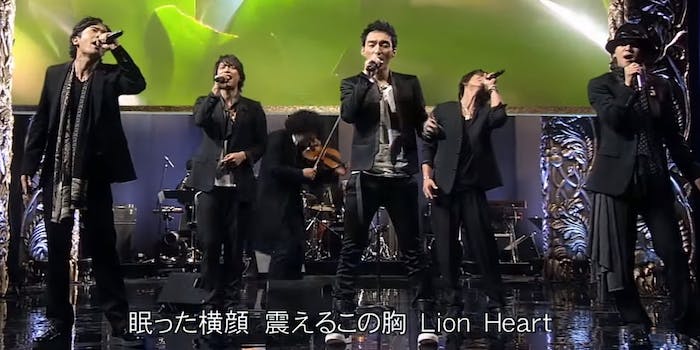 One Direction‘s hiatus may be a tragedy to millions, but it has nothing on the tribulations of Japan’s most popular boyband, SMAP. Following rumors of a potential breakup this week, SMAP had to apologize on live TV, resulting in news coverage that crashed Japanese Twitter and inspired comments from prominent politicians.

SMAP, which stands for Sports Assemble Music People, is one of the most established products of the Japanese idol industry. Formed in 1988 by the talent agency Johnny & Associates, the band is virtually unavoidable in Japanese pop culture, appearing regularly on TV, in commercials, and on the music charts.

In some ways the Japanese idol industry is similar to the semi-manufacturered pop stars of the U.S., but there is really no Western equivalent to SMAP. To get an idea of the influence wielded by their talent agency, you only have to look at the public response to the band’s TV address from Monday night, in which the five members appeared in somber grey suits to apologize for rumors of a split.

This video is awkard, to say the least. The band members didn’t directly address the rumors, but instead gave vague apologies for “causing concern,” reaffirming their solidarity as a band. None of them look remotely happy to be there, and the apology was addressed both to fans and to Johnny & Associates founder Johnny Kitagawa. The 87-year-old mogul is an enormously powerful figure in the industry, so much so that a 1999 child abuse case barely made a dent in his success.

While breakup rumors would send any band’s fans into turmoil, SMAP’s apology has a more complex subtext than One Direction reassuring their fans about an eventual reunion. Rather than being an issue of infighting or creative differences, the real controversy is over SMAP’s decades-long contract with Johnny & Associates. Now entering middle age (the oldest is 43), the band’s joint career has always been shaped—or, arguably, controlled—by their agency. And according to recent news reports, four of the five band members want to leave.

SMAP’s televised address was such big news that Japanese Prime Minister Shinzo Abe weighed in, saying, “Like in the world of politics, I assume there are various challenges for a group to keep on going for such a long period of time.” The chief cabinet secretary added that he hoped the band would continue to “give dreams and hopes to the public.”

Following the flurry of rumors last week, SMAP fans were overjoyed to hear that the band has no immediate plans to break up. But it’s hard to ignore the unsettling tone of the apology, which saw SMAP literally bow to the control of their talent agency.