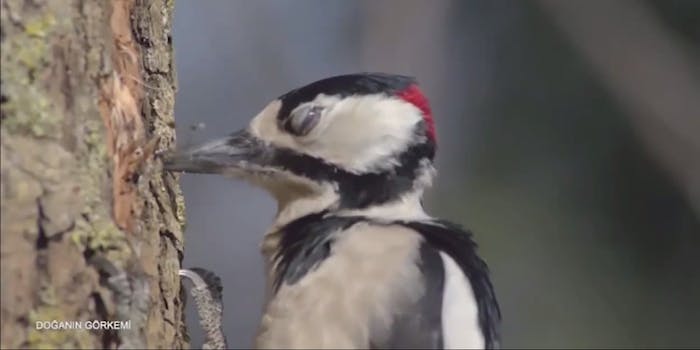 It shows just how strong the force of impact of banging your face into a tree really is.

You probably haven’t considered it before, but the woodpecker is a pretty tough customer. When it pecks at wood, it slams its face into the tree, withstanding a force of 1,000 G’s without so much as a concussion or brain damage.

This slow-motion GIF drives home just how intense the impact is.

Woodpeckers avoid injury and headaches with their specially designed skulls. In 2012, researchers found that their skulls are constructed of thick, spongey bone that absorbs much of the force of the pecking. Their hyoid bones—U-shaped bones set below the jaw—are also specialized. The prongs of the horseshoe wrap all the way around the back of the skull, acting like something of a sling so that when the impact radiates through the beak, it’s redistributed into the hyoid bone.

The beak itself is constructed in such a way that it distributes the force down and away from the brain case. Lastly, they also have a specialized third eyelid that keeps their eyes from popping out of their skulls.

In fact, the woodpecker is so good at not getting concussed that some are looking to its skull to inspire better designs for sports helmets.