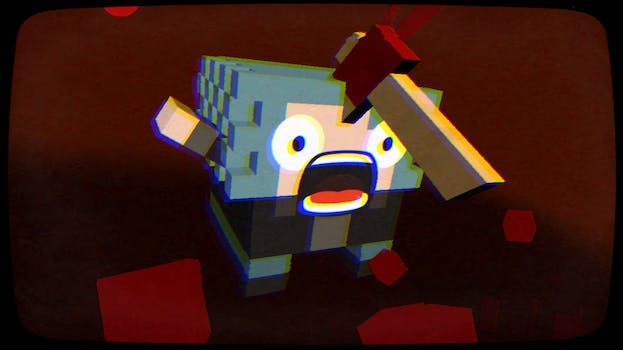 This cute puzzle game is a tongue-and-cheek homage to horror films.

No matter what you’d pick as your favorite puzzle game—a cutesy boredom remedy or an artistic mind-melter—the concept behind them is the same: Test your brain and be amused for a little while. Typically, there is no chance this will be a violent activity.

In Slayaway Camp, a free web game out today that development studio Blue Wizard calls a “horror puzzler,” your solving skills may very well be interrupted by a shriek or a bloody knife. That’s because the game is an ode to ’80s slasher flicks, says developer Jason Kapalka, one of the original co-founders of PopCap Games.

“I like the idea of the cerebral puzzle game, but I find most of them really boring,” he told the Daily Dot. “So the big challenge was whether it was possible to make a sliding block puzzle that had a visceral, crunchy fun factor to it. In this case, it just happened to be extremely gory, and gory puzzles are not a common thing, so that was a fun angle to take.”

With a look that’s equal parts South Park and Minecraft, Slayaway Camp puts you in the role of Skullface, a murderous figure that’s out to kill every teen counselor at Slayaway Camp (did no one’s parents notice that name sounded ominous?). You’ll have a variety of ways to wreck vengeance as you proceed through 150 levels that are all homages to classic horror films like Friday the 13th. Even the kill scenes are references to obscure flicks like The Burning and Driller Killer. 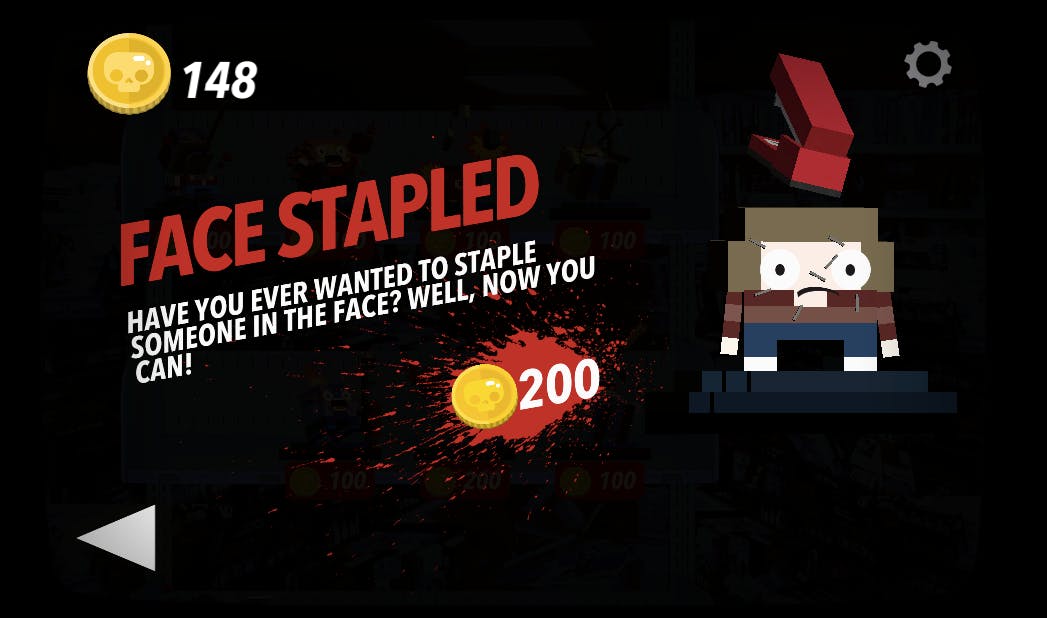 For those well-schooled in horror-film lore, special cameos should also earn a smile. Fans should keep an eye out for Mary Mason from American Mary, and Derek Mears, who played Jason Voorhees in the 2009 reboot of Friday the 13th and will voice the role of “Final Girl Jessica.”

Kapalka said that he and Ido Yehieli, creator of the Cardinal Quest series, had been experimenting with the idea of making a rogue-like game when they stumbled upon the idea for a horror puzzler.

“Our original prototypes were not at all along the vein of what we ended up with,” Kapalka said. “There was a Star Trek look to them. It was OK, but it wasn’t grabbing anybody. During one of the experiments we had a thing where you were walking around and killing blobs or something, and we said, ‘What if those weren’t blobs, but teenagers? Because everyone hates teenagers,'” he said, laughing. “We started calling it ‘killer puzzle.'” 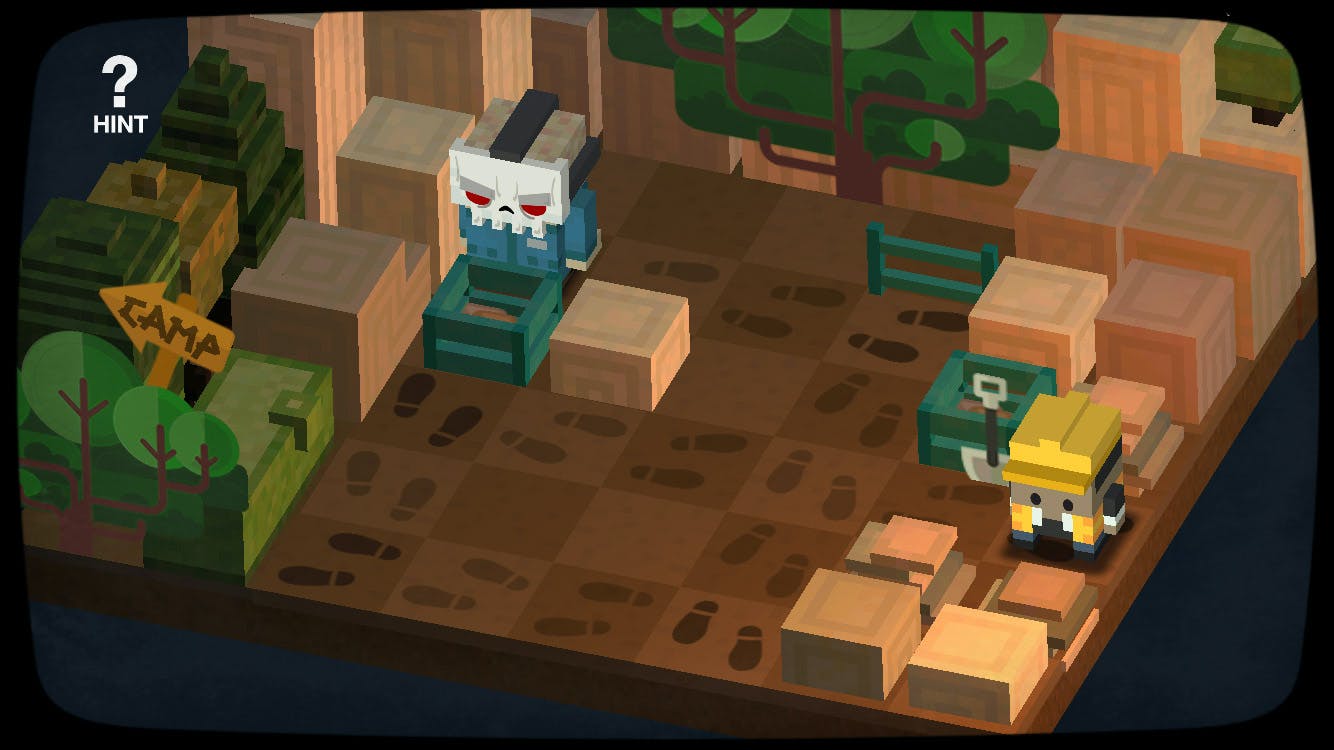 Kapalka admits to being the biggest horror buff on the Slayaway Camp team, with a specific taste for slasher films, even though he admits that many of them were “really bad.”

“They were more fun to think about than actually watch, for the most part,” he said. “Sorority House Massacre and all that, low-rent versions of Friday the 13th. They make for good unintentional comedy though!”

It took about a year for a team of five to create the game, with artist Nate Schmold (Cosmochoria) joining to provide the distinctive blocky look and give the game’s characters personality. Not only does the game have a spooky theme, but levels also come in the form of old VHS tapes found in a questionable-looking video store. After completing a movie (a set of 10 levels), you can unlock a new murderer to play as. Many of them will seem somewhat… familiar. 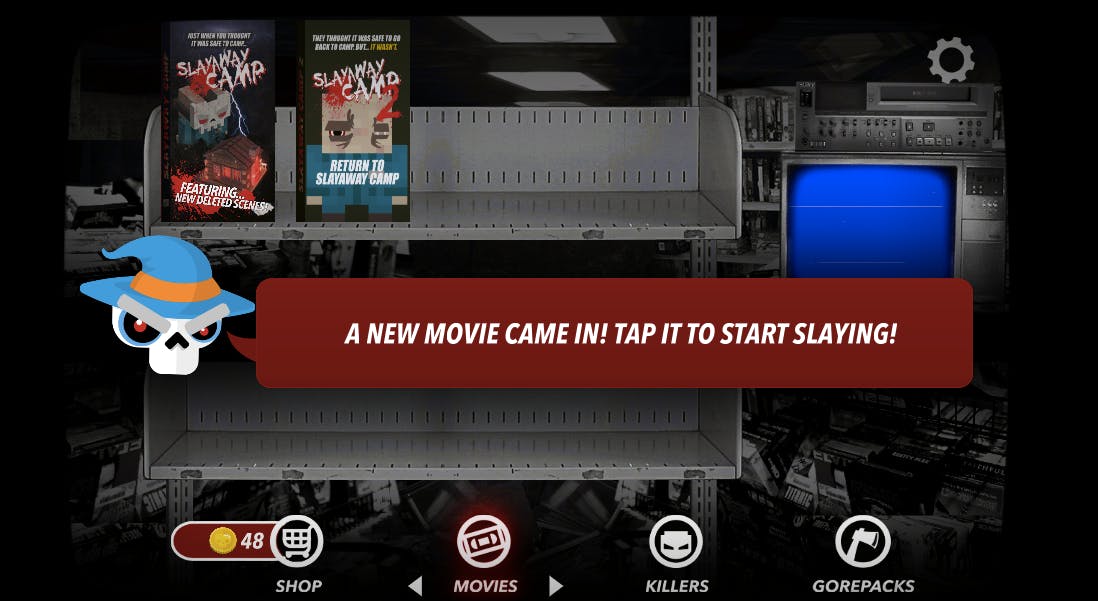 Another part of the plan to make Slayaway Camp a bigger experience was creating a social media presence. Kapalka’s team created Twitter feeds for the victims as well as for Skullface to create richer backgrounds for the characters, so it would feel as if they had been around a while.

okay well im not like 100% sure but im PRETTY SURE that people are being MURDERED okay??

While Slayaway Camp is “free to slay,” Kapalka says there’s still a chance that a deluxe version may later be released for a small price. However, he believes that on web and mobile, free is the way to go if you want your game to be a success.

“On mobile, premium games is a hard path to take,” he says. “It’s almost impossible to survive unless you’re really lucky, because people won’t pay more than a buck or two for a premium title. Even a game like Monument Valley, which is a big hit, was only able to charge a few dollars for the game, and when they tried to do a $2 expansion people flipped out and gave them one-star reviews.”

Kapalka says he has learned from his past at PopCap that developers don’t really get to choose the financial model: Trends dictate what is expected of them. However, he believes that getting free-to-play games right is about how they are framed.

“League of Legends is free to play, for instance, but you’ll never see it referred to as that,” he says. “I think it’s intentional because free to play has a certain connotation. The term is becoming like ‘casual game.’ It’s useless. No one needs to be told a game is free to play because they expect that it will be. A ‘premium’ game, or a game that costs money, is the one with unusual status. It’s not true yet on PC and console, but the concept is making inroads there.”

The Blue Wizard team is putting finishing touches on the mobile version of Slayaway Camp, which Kapalka says should be out by late summer. In the meantime, plug in your headphones so you can enjoy the shrieks while you wait.