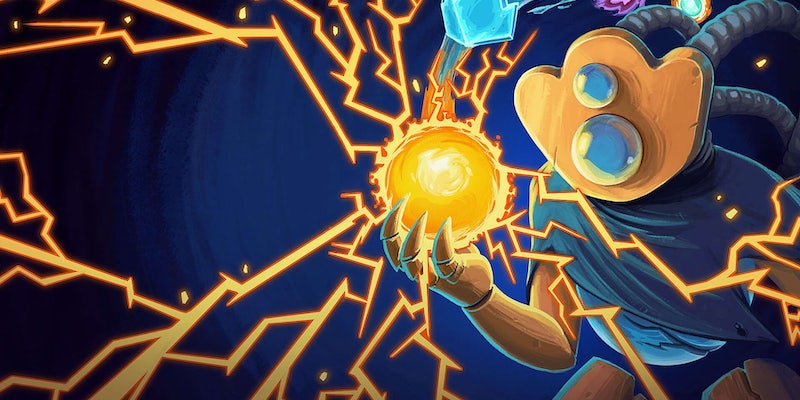 Review: Slay the Spire will suck you in for ‘one more run’

This card-based dungeon crawler is one of the latest excellent indies to hit Nintendo Switch.

My palms have started sweating, and I can barely keep hold of my Nintendo Switch. I’m on the final floor of a tower filled with creatures that want to kill me.

I’ve been here before.

My opponent, a bulky, armored knight, has just popped an ability that shields his entire body. Above his head, a number indicates that the next swing of his axe will knock off more than 30 hit points. Quickly, I do the math in my head and consider the cards in my hand. Suddenly, it hits me. I’m not going to make it any farther. As the enemy strikes, my hero falls.

I’ve been here before as well.

Situations like these have become familiar after several hours with Slay the Spire. This roguelike deck-builder, the first game from MegaCrit, just made its way to consoles after a long period of early access on Steam. You wouldn’t be wrong to think any description of this game reads like an extensive bullet-point list of popular buzzwords: Dungeon-crawler. Turn-based. Card combat. Procedurally generated. Permadeath.

But Slay the Spire is wholly unique: Taking inspiration from several genres, it provides an experience like nothing I’ve ever seen before.

By design, this is equal parts Hearthstone and Rogue Legacy; Magic: The Gathering meets Spelunky. The core loop is based around running through random levels, facing enemies, and uncovering treasures along the way. Like other games in the genre, when you fail, your character (and your progress) is gone for good.

However, the hero itself is not the focus. Being a card-based adventure, Slay the Spire’s outcomes hinge on how you choose to build your deck. Every action your character takes is determined by a card in your hand: attacking, blocking, and healing are all represented as individual moves to be taken each turn. After a bout of combat, you’re able to draft new cards into your collection—and here, the real game begins.

Each run is defined by the choices you make—and you’re almost constantly making one choice or another. In a way, surviving each battle and beating your enemies is the single least important factor in preserving success. With a limited amount of energy to use each turn, and a fixed number of cards that can be held, there needs to be a delicate balance in your deck at all times. Too many attack moves may leave you susceptible to sudden strikes; too many defensive combos might draw battles out for painfully long; and cards without synergy can make every turn feel like an excruciating battle of attrition.

In fact, one of the first bits of advice Slay the Spire offers a new player is to get used to refusing the occasional free cards that are offered in between levels. Discovering a strategy that works and sticking to it is the only way to keep climbing the towers ahead of you. On top of that, there are relics (artifacts that grant consistent bonuses and buffs) and random events to account for.

With three playable characters, each specializing in a different set of tactical deployments, Slay the Spire holds promising variety. Which is heartening: after a grueling defeat, you never have to retrace the same exact steps over and over again. The Ironclad plays like a traditional warrior, dealing massive strikes with a broadsword to efficiently cut down enemies. The Silent, predictably, functions more quietly, with quick attacks that can trade blows and layer damage on waves of foes. But my favorite character to play is unlocked after trying the first two, known as The Defect. A robotic mage, this character makes use of mystical orbs granting elemental attacks. Here, I came to understand the necessity of combos and carefully curated card choices.

It can be easy to get overwhelmed by the number of various factors at play in a single round of Slay the Spire, but the most effective way to learn is always to experiment with what you’ve been given.

On a single screen, you have all the information you could possibly need. You’re able to peruse the contents of your deck, as well as the cards you’ve already played. Knowing what’s in your hand (and what isn’t), you’re able to plan an effective strategy for this turn and your next. Enemy intent is displayed as a bouncing icon above the foe, telling you what’s coming your way after you’ve expended your allotted energy for that turn. After both sides move, your discard pile refreshes into your deck and the back-and-forth begins anew.

An individual run is decided by stringing win after win until you slay the final boss, or succumb to the horde… but what remains consistent between runs? As you gain experience (both the measured in-game meter and the learned value), the game begins to reward you with new toys to play with. Your collection of all the possible cards you can encounter in a subsequent playthrough is constantly expanding, meaning that your strategies must evolve as well.

There are hardly any binary choices to be made in Slay the Spire, as the routines you settle in to are only housed in what’s viable on the early floors of each run. As you ascend, the unpredictable elements only come more frequently.

If there’s anything I can fault this game for, it would be lackluster presentation. On-screen text often gestures at a larger world with twisted, interesting lore, but there’s no main narrative to follow. Character art is often static and empty, though animations evoke the movements of each card with admirable accuracy. For a game with such dynamic and captivating gameplay, the visuals and music often leave much to be desired.

Slay the Spire has grabbed my attention the same way games like Dead Cells and Wargroove have in the past. While I’m playing, I’m enthralled by the intricacies of every new mechanic folded into my progression. When I’m away from it, I’m imagining new experiments and combinations to toy with on a future run. I stare at the game’s start menu, telling myself, “one more run.” Of course, this more than likely means one more death—but who can say what might come from the run after that?

Slay the Spire is available now on PC, PS4, and Nintendo Switch. This review was written based on a Nintendo Switch version of the game provided by the publisher.