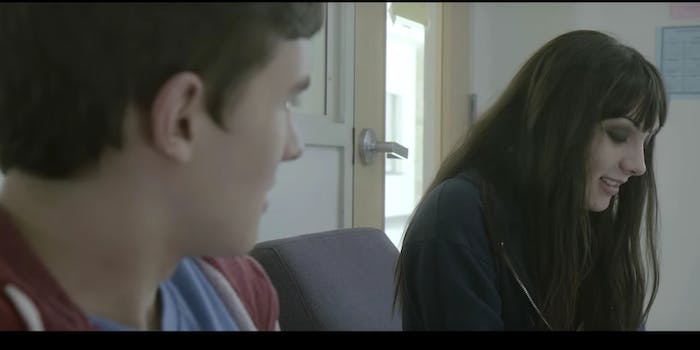 Slash fans who voiced concerns over the film during its Kickstarter phase were right to be worried.

As I was leaving the screening for Slash, Clay Liford’s new independent film about a teen using fanfiction to explore his sexual identity, another reviewer remarked that it was SXSW gold. The film, which premiered at SXSW Interactive Sunday, was “made for SXSW,” they commented.

“Probably,” I answered, “but it sure wasn’t made for slash fans.”

Beautifully filmed and wonderfully acted, Slash often resembles a John Green novel, albeit one told with more nuance surrounding sexual identity and orientation. That is, it’s a coming-of-age story told from the point of view of a teenage boy who finds his inspiration through a troubled, complicated girl who’s battling her own demons. Despite Hannah Marks’ warm acting, and despite the script’s token efforts to give her autonomy from Neil’s own journey of sexual exploration, Julia still bears all the earmarks of a classic manic pixie dreamgirl.

But just as the media hype surrounding John Green novels has frequently overshadowed the work of women in the heavily female-dominated Young Adult genre, so Slash threatens to overshadow and erase the real landscape of slash. For all it may be a movie titled Slash, its depiction of slash is completely wrong. It is a bizarre, distorted, inaccurate, outdated, inexplicably porn-obsessed, and inexplicably male-centric version of slash fiction and slash fandom that doesn’t reflect reality.

Slash fans who viewed the trailer during the film’s Kickstarter phase last year were afraid of just this outcome, and they spoke out vehemently against the film then. Director Clay Liford, however, assured me in an interview that the film had the best of intentions and shouldn’t be judged by outward appearances. “Hopefully we can show our intentions are sincere and that we’ve done our homework,” he said.

This meant that every conversation about fandom sounded bizarre, stilted, and ridiculous, and it was completely embarrassing. Most human beings in real life don’t talk like this, let alone slash fans, who are 800 trillion times more likely to spend a whole convention arguing about canonical plot holes than they are to utter the words “dick size” out loud.

It seems no one told Liford this—and it’s baffling that perspective is missing given the contemporary makeup of the slash community. (Did he talk to female fanfiction writers or to anyone who’s written a slash fic in the last decade?) At one point a (male) writer makes a joke about Warner Bros. issuing a Cease-and-Desist “last week” for his fanfic, something that in real life, Warner Bros. has not done since the early-2000s.

Like the bestselling Young Adult novel Fangirl, Slash attempts to depict a story of a teenager using the world of fanfiction to help them navigate real life. But unlike Fangirl, Slash was created by someone with no personal experience with slash fandom. This is painfully, distractingly obvious in every scene if you’re a slash fan. As a regular moviegoer, I watched this film in admiration of its refreshing portrayal of the inner lives of teenagers, the nuanced characterizations of the two main characters, the pacing, the lighting (this film had great lighting), several sections of dialogue, and especially the acting.

As a slash fan, I watched this film like this:

Watching Slash was like entering a distorted alternate universe where predominantly white, male sci-fi fans evolved erotica from old-school science fiction/fantasy culture (SFF) and called it “slash.” In reality, women evolved slash—which is, again, not a synonym for erotica—arguably in part as a countercultural reaction to old-school SFF, deliberately moving it as far away from that male-centric tradition as possible.

At one point during Slash, a male SFF writer discourages Julia from publishing her writing. This is a savvy testimonial to the inherent gatekeeping of the traditional SFF fiction world, but the impact of this moment was negated because Slash‘s fanfiction universe is indistinguishable from old-school SFF. In reality most women of modern slash fandom aren’t trying to get into that space. They are, if anything, working to move the SFF community away from its traditional guardposts and toward a more progressive, self-aware kind of fiction.

In Slash, only two adult women who write fanfiction are shown for any length of time. One is briefly seen and socially awkward. The other is the villain of the movie—a frigid, rule-obsessed stereotype who writes incestuous underage Brady Bunch fanfic. The rest of the fanfiction writers with any screen time are all men.

At one point, a mention of “curtain fic” is given, and described as being targeted to 40-year-old gay men. The reality is that women invented curtain fic, and they write it about characters of all ages. Women write curtain fic for themselves and other women. For all it may be about fictional gay men, slash often has very little to do with real gay men. Slash fandom is and always has been a separate space created by women, for women. When men read and write slash (and they do!), they are doing so in female spaces, in a culture dictated and evolved by women.

There are a litany of things that are inaccurate about Slash‘s portrayal of slash and slash fandom, but this was by far the most glaring and upsetting: seeing a subculture I’ve happily participated in for nearly two decades be turned on its head and presented as a space that’s all about men—specifically white men. Although Neil imagines that his fictional hero Vanguard is black, and although this is meant to be a critique on the ubiquitous whiteness of science fiction, Vanguard is the only person of color who seems to occupy this space. At one point an otaku (anime fan) is shown long enough to verify that she’s got brightly colored hair, but that’s as close to diversity as this film gets.

To add insult to injury, the primary adult fic-writing man, as embodied by Michael Ian Black, is an unhappy geek stereotype who lives with his mother and declares himself too socially awkward to function outside of conventions. “Do you want to become a writer?” his character, Denis, asks Neil at one point. “Not just fanfic, but real writing.” To be told you need to grow up and become a “real writer” is anathema to most fanfiction writers, many of whom are adult professionals who continue doing what they do out of love.

The implication that slash is a subterraneous form of naughty rebellion is an outdated stereotype that the film doesn’t really seem to be aware it’s making. Even the kind of fanfiction archive Neil accesses is extinct—it’s been well over a decade since the kind of private, single-fandom, adults-only fanfic server he discovers actually was common in fandom. At one point, a dismissive comment about RPF—real person fanfiction—gets made: the observation that most people writing RPF are just tweens and teens who are into boy bands.

But Liford, who wants his film to feel like a contemporary depiction of Internet culture, would have done much better to depict a Neil falling in love with Harry Styles fanfic on a Wattpad-like text-and-upload kind of fanfic forum, or gushing about Larry Stylinson on Tumblr and AO3. That‘s what teens are doing in slash fandom culture these days, not lying about their age on archaic hidden-away websites populated mainly by adult men.

In one of the moments from the trailer that enraged slash fans, Denis addresses his fellow fanfiction writers at a convention as “misfits, freaks, and sexual deviants.” Even if this stereotype were ever true, it’s less true now than ever, and geek culture—slash included—is more mainstream than ever. Plenty of people like me have spent years, over a decade in my case, publicly owning their fandom identities in an effort to dispel the secrecy and embarrassment surrounding the writing of fanfiction. At this point in the evolution of Internet culture, slash is just another hobby practiced by millions of people around the world. They’re totally normal. It’s fine.

Liford has stated before that when he first read slash online he was “repulsed.” I wish I’d been able to stop him there. I wish I, or another slash fan with long experience in slash communities, had been able to show him Written by the Victors, or Promstuck, or Drastically Redefining Protocol, or I’ve Got Nothing To Do Today But Smile, or Steve Rogers at 100, or Drop Dead Gorgeous, or The Paradox Series, or any of the hundreds, thousands of slash fics that have defined my cultural experience and those of legions of fans like me. None of these fanfics look or sound like or function like the fanfics depicted in Slash. I have to wonder if he’s ever read a good slash fic in his life.

Liford’s loss is fandom’s loss, too. Instead of feeling welcomed and embraced, I felt totally misunderstood and misrepresented as a slash fan, and honestly baffled about how the film got my community so totally wrong.

Beyond its fanfiction narrative, Slash is easy to enjoy. It’s warm and funny. There’s a lot of good, refreshing stuff going on in this movie regarding queer sexuality and teen sexual exploration. And it’s impressively open-minded and non-pejorative in portraying the role that slashfic plays for young queer and questioning men.

But while slash fandom all too often erases the real men who participate in the subculture, Slash‘s answer to that erasure is to completely rewrite what slash is. I don’t think anyone benefits from a view of fanfiction culture that feels at least 15 years outdated and which completely shifts the focus away from the experiences of women who created and built the culture.

I kept wishing I could have had the coming of age story of Slash as a separate movie, far removed from any depiction of fandom. Slash clearly wanted to live in the ambiguous spaces between the intersection of real and online life, but in doing so, succeeded in creating a story that was only compelling half the time.

Ultimately, the bizarre disconnect between Slash‘s refreshingly modern views on queerness and its heinously archaic views on fanfic probably won’t bother general audiences who don’t know any better. But then, those are the audiences who, like the other viewers at my screener, laughed at some of the wrong parts. Slash was, to them, an upholding of everything they already think it’s OK to mock.

Slash was, to me, a reminder that the only way for fandom to have any story about fandom told accurately is for us to tell it ourselves.

Correction: A previous version of this story incorrectly identified a member of the Teen Wolf cast.