A skeptic’s guide to spotting an “Internet kook”

A skeptical member of the conspiracy theory forum Above Top Secret gives his expert view of how to identify some of the Internet's most fafetched kooks.

At the 2011 panel on conspiracies at DragonCon, Prof. Bob Blaskiewicz defined a conspiracy as a “small number of people doing very, very naughty things in secret.” At the forum AboveTopSecret (ATS), nearly 270,000 conspiracy buffs and skeptics coexist, striving to bring critical thought and a “question everything” mentality to a broad range of topics—everything from alien abductions to World War Three.

As an online movement, the skeptics community tries to obtain proof for the elaborate theories and belief constructs that proliferate our world, even as conspiracy buffs try to prove that few things are as simple as they first appear. As ATS shows, there can be a surprising amount of overlap between the two groups. So how can you tell who the truly “kooky” people are?

ATS member adjensen thinks he has the answer. In “The Illustrated Field Guide to Internet Kooks,” adjensen, whose real name is Dale Jensen, serves up what he claims is “over 20 years of scientific observation” of the most far-fetched conspirators on the Internet, all in a handy, gloriously ugly list.

“This thread is going to give me nightmares about tables for layout and alt tags displaying in the status bar,” ATS user Time2Think joked.

We’ll spare you the garish neon red text on bright red backgrounds and offer up some of the highlights.

According to Jensen this is such a telltale phrase that it’s the first item on his list for identifying when someone is over-invested and using a sensible directive to justify irrational beliefs. It’s especially likely, Jensen says, if they repeat the phrase or apply it to a subject for which research is impossible, like the existence of God. Or, of course, if they write it in giant ugly-colored font. 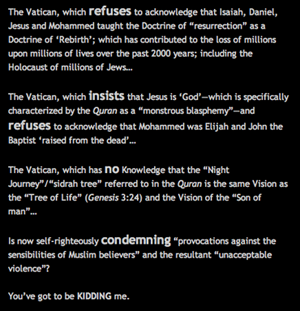 “Another good clue is a million links to articles/rants/information buried within the web site,” Jensen writes. “Generally, this indicates that the person has spent most of their life on this project, rarely a good thing.”

“[T]he amount of white space in a post, page or message is inversely proportional to the amount of insanity contained within.”

We’ve all seen them: wall-of-text manifestos on a single, endlessly scrolling page, punctuated by low-resolution images. Writes Jensen, “The kooks… apparently feel that if you’re forced to go to another page, your senses will return to you during the load time.”

When someone claims to be someone they’re not, it’s a good bet that their objectivity may be compromised. 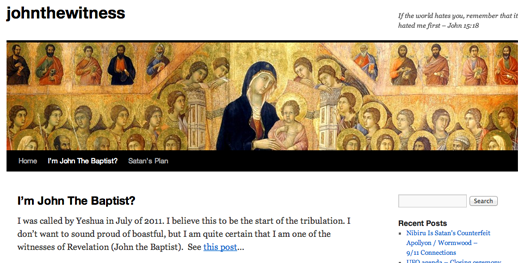 Stating obviously false information as if it is truth is another sign. “Only a kook,” says Jensen.

Jensen points to boggling websites like Future Visionaries and Project Elijah as examples that combine many of the points above.

After Jensen posted his Field Guide, other ATS members continued in the same vein, pointing out banned forum members, ridiculous lies on the Internet, and their personal favorites.

Some users were, fittingly enough, skeptical about Jensen’s methods. “You wrote a rant about rants?” was the first response. Another user took issue with his description of Cassiopaea, a site of proclaimed scientific mysticism, as one of the supreme kooks, suggesting that Jensen obtain more than a cursory view of what he’s skewering.

The ATS forum members tend to skew towards the conspiracy buffs, though many skeptics haunt the joint, and many buffs are also skeptics. “It is rare to run across someone who buys into everything,” Jensen told the Dot. “My ‘Field Guide’ thread was a bit of a tongue in cheek nod to those sorts.”

“Even if I don’t agree with it, I can appreciate their passion in believing something so firmly, while the rest of the world has a chuckle and moves on.”