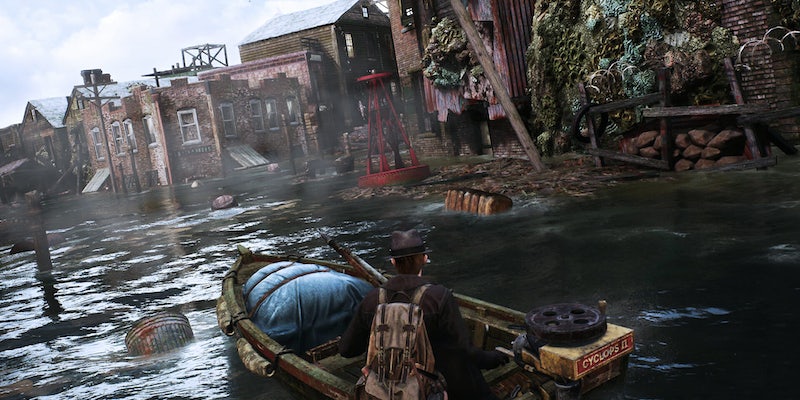 The Sinking City realizes Lovecraftian horror in a new light

The latest game to adapt Lovecraft's fiction does so with a critical eye and some thrilling detective gameplay.

Detective Charles Reed is plagued by apocalyptic visions. Reluctantly, he finds himself traveling to Oakmont City, a destitute metropolis whose people reportedly suffer the same phenomena. Oakmont, reeling from a natural disaster, has been partially lost to the sea. Bloated whales wash up on shore. City streets are flooded with fetid, brackish waters. And the townsfolk seem to have been put under a frightening, violent curse.

So begins The Sinking City, the latest adventure game from noted developer Frogwares. While this may sound familiar (possibly generic) to even the most uninitiated reader of H.P. Lovecraft’s fiction, that’s the intent.

But The Sinking City is strikingly more ambitious than anything else in this studio’s repertoire. Oakmont is at once sprawling and oppressive: a dense, deliberate labyrinth stuffed full of intertwined plot threads and copious references to Lovecraft’s mythos.

As Reed, players are tasked with solving the city’s ongoing hysteria and assuaging the concerns of a vast cast of curious characters. In choosing a wider, open setting, Frogwares has built a city that feels dynamic to explore, as if it were itself alive.

Systems similar to other detective games are at work in the bulk of The Sinking City’s mission design. There’s a simulated super-sense à la Arkham Asylum, witness interrogation inspired by L.A. Noire, and even clever case-building puzzles that reminded me of last year’s excellent Return of the Obra Dinn. Where The Sinking City shines is in the elimination of any simple solutions. No matter how big or small the investigation, you must do it yourself.

This comes to life in a growing casebook, where the game tracks Reed’s progress through shorthand notes and detailed documentation. Every letter, sign, or article you come across could contain a clue on where to investigate next, and you’ll only find them by paying close attention. The Sinking City demands astute observation—in everything from vague suspect descriptions to the intersection of street corners.

Players must commit the very geography of Oakmont’s intricacies to memory. This means looking at every building, watching for notable monuments, and tracking the distance traveled in any cardinal direction. In this way, the world captures what it might be like to inhabit a Lovecraft story.

Thankfully, Frogwares didn’t just show up to pay tribute to the author. This game’s ambitions aren’t only demonstrated by the scope of the city, but in narrative resistance to Lovecraft’s worst tropes.

To position H.P. Lovecraft as a merely a “problematic figure” in literary history is wholly dishonest. Lovecraft’s rampant racism, isolationist perspective, and backwards worldview have been well-documented time and time again. But the influence his works have had can be traced through too many modern cultural touchstones to count. Everything from Alien to Zelda pays overt homage to the Cthulhu mythos crafted in stories like At the Mountains of Madness and others.

More recently, creators have pushed back on the notion of Lovecraft’s overwhelming canonization. Matt Ruf’s Lovecraft Country boldly tackles the exact bigotry expressed in his worldview. In The Ballad of Black Tom, Victor LaValle repurposes racist tropes as a rapid revenge plot against the author himself.  Even Alan Moore addressed how central hate has been to Lovecraft’s stories in his comic series Neonomicon.

Video games, though, have had a particular reverence for Lovecraft, often adapting the substance of his work selectively—keeping the sleepy East Coast towns haunted by ghoulish abominations from the sea, while ignoring any of the obvious prejudice in his characters.

But The Sinking City is brutally honest about the nature of Lovecraft’s work.

Part of what makes Lovecraft’s fiction compelling to readers after all this time is the existential dread expressed in facing down an unknowable evil. The “nightmarish terrors” that he described at the bottom of the sea, crawling their way to the surface are viewed exactly the same way he thought about people of color. That terror, for the author, was directly fueled by racism.

And so, in Oakmont, characters are made aware of their differences in a way this genre typically doesn’t allow. Take Robert Throgmorton, for instance. The uptight magnate first tasks Reed with finding his missing son. He believes the disappearance to be the work of Innsmouthers—a caste of amphibious islanders he sees as “fish-faced, filthy migrants.” Throgmorton himself is subject to prejudiced descriptors as well, for his apelike appearance.

Oakmont is often described as a “city on the rise,” but the dilapidated architecture and rising anxiety of its people tell a different story. The exact prejudice that fueled Lovecraft’s understanding of the world around him is used here to demonstrate just how awful such a society would be. Understanding these precise tensions informs every decision the player is asked to make, and there are few simple answers.

For example, the first case resolves after Reed discovers Throgmorton’s son hung in a nearby basement. There’s evidence of a fight, and no doubt the Innsmouthers were involved. But, knowing of a madness spread through disease targeting the Innsmouthers, Reed has reason to believe the entire incident was an awful accident.

Here, the game presents the chance to lie to Throgmorton. I felt sympathy for the Innsmouthers I had spoken to already,  and was naturally turned off by Throgmorton’s xenophobic rhetoric. No one else was going to get hurt, so what’s the harm in protecting an innocent man? I falsely told Throgmorton that the case was a dead end—and the game allowed me do it.

More than any game I’ve played before, The Sinking City understands what it means to be Lovecraftian. Oakmont is contaminated with hatred, with sickly, chilling environmental detail. Citizens spew vitriol at the player and at one another. The streets are often raked with rain and a harsh wind. Frogwares’ detailed ambiance goes a long way in making this game stand out among a crowded field.

Its faults, however, are unavoidable. The Sinking City plays as if it were a B-movie at times, with janky animations and flat user interfaces. I had to sit through some frustrating load times and encountered plenty of puzzling performance issues. It’s encouraging, however, that my biggest problems with the game could be smoothed over in a future patch.

Likewise, combat fails to prove engaging. I have yet to play a game that pays homage to Lovecraft’s oeuvre and makes stealth or shooting entertaining, but I’m sure it can be done. Due to a fixed over-the-shoulder perspective, aiming a weapon is often harder than it needs to be. There are too many sections with random enemy encounters to overlook the issues in the game’s action mechanics, and I almost wish it were completely devoid of any such scenarios.

Still, The Sinking City delivers when it needs to. There’s a section early on where Reed dives underwater that truly contains one of the most bone-chilling, terrifying sequences I’ve ever seen. Hearing Reed breathe in a small, claustrophobic diving suit, formless apparitions danced before my eyes in the darkness of the deep. Every sound effect, creature design, and mysterious vision in this adventure contributes to an overwhelming sense of dread.

Through tactile detective work, The Sinking City realizes Lovecraftian horror in a new light. The trial-and-error required in mundane work like digging through newspaper archives addresses the obvious outcome that Reed will fall in the face of a cosmic horror. It paints the laughable circumstances he’s up against as an overtly bleak, pulpy spin on the adventure games of years past. This game doesn’t yield on a vision of sustained terror, both fictional and driven by real-world toxicity.

It’s not a particularly pleasant experience—but it is uncompromisingly captivating.

The Sinking City is available on June 27 for PC, PS4, and Xbox One. It will release later this year on Nintendo Switch. This review was written based on a PS4 copy of the game provided by the publisher.