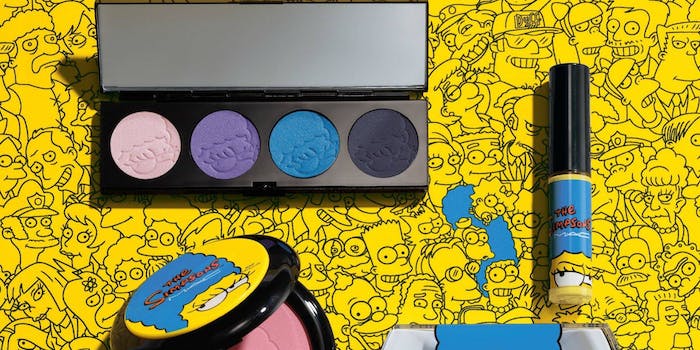 It'll bring out the Beehive Blue in your eyes.

Get ready Simpsons fans! If you’ve been dying to get your hands on the recently announced MAC Cosmetics line being released for the show’s 25th anniversary, you’ll have one day this month to purchase it before it’s released in August.

The 10-piece collection, inspired by everyone’s favorite blue-haired mom, Marge Simpson, will be sold exclusively for one day at San Diego Comic-Con on July 26. It will be sold at MAC’s Gaslamp store located at 234 Fifth Avenue where fans can also receive a Marge makeover. The collection includes eye shadows ($44), lip glosses ($16.50), lashes ($18.50), and nail stickers ($16.50). The sneak peek image MAC released this week shows some of the fun Simpsons’ colors the collection will feature, like blue and purple. More images revealing the nail stickers and lip glosses are also surfacing on blogs from MAC’s recent media preview. One of the most exciting photos reveals some yellow, thanks to a lip shade.

Fans on Twitter were excited by what they saw.

My intention wasn’t to buy the nail stickers, but now I think I will. 😍 So cute!!! #MACandMARGE pic.twitter.com/VP5VYr7OzR

#MACandMarge IS GOING TO BE THE HIGHLIGHT OF MY BACK TO SCHOOL PURCHASE. I don’t need another eyeshadow palette but this is going to be mine

I’m so happy Comic Con is in San Diego! I can pickup some #MACandMarge @MACcosmetics !!

Marge Simpson even put out a statement on the line, saying, “They’re all so great, but I must say that Lisa’s Spikes really works well with my skin tone and of course, Beehive Blue complements my hair perfectly.”

Beehive Blue? In the words of Mr. Burns, this entire collection sounds rather “excellent.” People unable to make it to Comic-Con can get their hands on the collection online starting Aug. 28 and in stores Sept. 4.