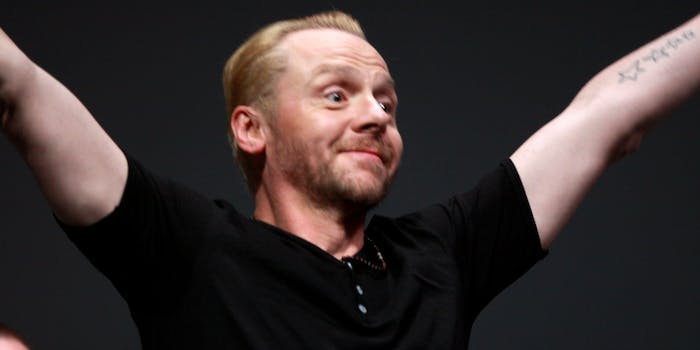 Simon Pegg, are you listening?

“Don’t bite the hand that feeds you” is what they tell you when you’re growing up—or, in the case of Simon Pegg, don’t stun the hand with a phaser. That is surely what Simon Pegg must have heard once or twice when he told interviewer Mike Ryan that Star Trek fans should “f**k off” after learning Star Trek Into Darkness was voted the worst Star Trek movie ever by fans. Pegg should probably be handling that subject a lot more delicately now that he’s co-writing the next Star Trek film.

Megan Fox learned firsthand how much scorn you can get for dissing a fanbase when she criticized fans of Teenage Mutant Ninja Turtles who didn’t like the changes the new film made to the designs of the characters. Sometimes you don’t even need to diss the fans of something for them to get enraged. Christopher Nolan made a comment last year calling movies that feature post-credit sequences “not real movies.” (The jury is still out on what “real movies” are.) Even though he didn’t outright mention Marvel films—which made popular the use of post-credit scenes in their movies—the inference was scandalous enough to invoke rage among hardcore Marvel fans.

Social media is forcibly giving celebrities a lesson in manners—a lesson they probably would rather not be learning. For some—like Megan Fox, Christopher Nolan, or Simon Pegg—it’s a harsh lesson full of undesirable consequences as celebrities are finally learning that fans can, and do, talk back. Trash-talk a beloved franchise, and you’ll hear about it—sometimes in the worst possible way, like via your box office numbers.

What’s surprising is that Simon Pegg didn’t think about this before he spoke. Pegg is actually a geek at heart—after all, he co-wrote and co-starred in the popular British TV program Spaced, a show full of nerdy references and moments. He’s also a talented writer—his writing credits include the Cornetto trilogy (Shaun of the Dead, Hot Fuzz, and The World’s End), the alien road trip comedy Paul, and Run, Fatboy, Run. When he speaks in interviews, he normally comes off as genuine and sincere. You would think he’d have better sense than to tell fans everywhere to “f**k off,” and he’s going to be eating his words now that he’s at the mercy of those fans as someone who’s responsible for shaping the next big-screen Star Trek adventure, because fans have very long memories.

It’s very likely Simon Pegg had no idea he was going to be juggling writing duties on the next Trek film when he made those comments. After all, J.J. Abrams had just left the franchise to direct the next Star Wars film and Roberto Orci had been discussed as a replacement. At the time he made those comments, he was just an actor playing a beloved character. It’s possible that if Pegg was in the shoes of Abrams or Orci he maybe would have thought twice about dissing an entire fanbase. While most fans have responded positively to Pegg co-writing the film, he has a lot to live up to now.

By the time Simon Pegg had made his comment, fans were already dubious of Abrams and the leaders currently shepherding their beloved sci-fi series, disappointed with what they perceived as a lack of respect for the franchise. His dismissal of their anger didn’t play well. In Pegg’s defense, he would later expound on his comments, saying he wasn’t telling the fans to “f**k off”—just the people that had voted it the worst Star Trek movie ever (even worse than Galaxy Quest, which isn’t even a Star Trek film to begin with).

Oddly enough, despite fan ire, Star Trek Into Darkness isn’t really a bad film. It has 87 percent on Rotten Tomatoes (for the audience score, it remarkably has 90 percent) and the film made a decent amount at the box office, earning nearly $470 million worldwide.  John Anderson of the Wall Street Journal said in his review of the film, “While the action is often electric, it’s the relationships that matter.” Dana Stevens of Slate offered, “[Abrams] has caught some of the spark of the first Star Trek without either mimicking or desecrating the original.” You would think Into Darkness would be heralded as one of the best in the series by fans. However, the reason why it isn’t most likely doesn’t have anything to do with the film’s quality itself.

Fans want to feel respected—to each and every person who loves Star Trek, it’s more than just a simple movie series to them. It’s something they’ve grown up with, lived with, and cherished with every iota of their being, and many felt that Abrams had done wrong by the beloved series. While Pegg may have thought he was making a flippant gesture, it meant a lot more than that to angry fans looking for a reason to be even more furious about the direction Star Trek had taken. If he wants his Star Trek to be successful, he needs to win back the love of fans, as they’re the ultimate deciding point in whether a series success or crashes and burns.

In a way, Pegg’s comments were understandable. He was defending the work of countless thousands who labored tirelessly over the film—including Abrams—who all spent an invaluable amount of time bringing it to fruition. However, they were difficult to justify, at least in the eyes of the fans. They also came too late. By the time Pegg tried to calm the treacherous waters, the damage had already been done. When a film you worked on is called the worst in a series—spanning 11 additional feature-length installments—the writing is already on the wall.

Pegg has a chance to make things right, if he plays his hand well. He’s in the navigator’s seat now, and responsible for dictating where the crew of the Enterprise goes next. Star Trek Into Darkness might have been voted the worst Trek movie by fans, but now he can change that with the next one, helping ensure Star Trek 3 is voted one of the best. A part of that also means not insulting the core fan base—a group of people that want nothing more than to love something they cherish deep in their hearts, but will tear that very something apart to shreds if they feel the masters have turned against them.

When Pegg tried to explain his comments, he said he was trying to defend the hard work of those that put endless effort into the last Trek film. Now, he’s going to understand those comments all too well. When Star Trek 3 warps into theaters on July 8th, 2016—on the eve of Star Trek’s 50th anniversary—he will have to contend with the expectations of the entire fanbase like never before. With Into Darkness, he was just part of the cast. Now, he and several others will be speaking dialogue he helped write. When he reads comments online about fans talking about plot points of the film, it’ll be plot points he helped create. Perchance, if he stumbles upon fans dissing his work if it’s not well-received, it might sting a little more than it ever did before—kinda like getting stung by a phaser.