Sid Meier’s Starships is perfect for tablet, a morsel for PC

Starships is better for a car ride, than a hardcore gaming session.

Sid Meier’s Starships feels like an appendage slapped onto Civilization: Beyond Earth, a strategically simple and tactically repetitive mini-game that might feel perfect on a tablet device.

Playing on PC, however, you have to wonder if adding Sid Meier’s name to the title of the game is an oversell, considering its association with complex strategy games. Neither the strategic nor tactical portions of Starships are deep, and the starship combat can be tedious once you figure out the optimal tactics.

If the relative simplicity of Civilization Revolution bored you, however, it’s probably best to look past Starships. 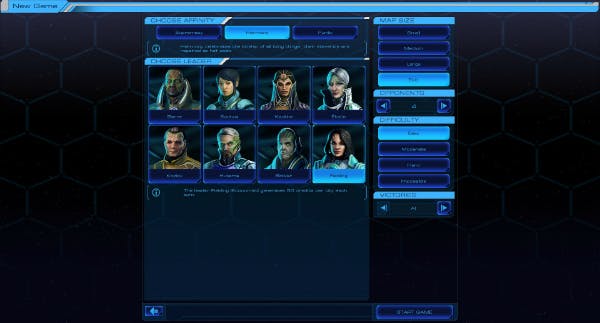 Sid Meier’s Starships takes place hundreds of years after Civilization: Beyond Earth, which told the story of how humankind spread from Earth to form new colonies elsewhere. Starships presumes that many of those missions were successful, and now the space-faring civilizations that blossomed from those colonies are coming into contact with one another.

The trappings of the Civilization franchise are most strongly felt in Starships during the setup phase, when you select the size of the map and the number of opponents to face. Players choose between one of the three Affinities, or the guiding principles of the aforementioned colonial civilizations, introduced in Beyond Earth: Supremacy, Harmony, or Purity. You also select one of eight leaders, all of whom carry different bonuses and traits.

You can choose whether some or all of the potential victory conditions are in play. You can win by conquering the capital worlds of all the other empires, reaching a goal population size, building the most Wonders, or having the most scientifically advanced empire.

The four basic resources in Starships also resemble the basic resource management scheme in the Civilization games. Food allows the player to build cities on worlds. Each additional city improves resource production levels on the planet. Metals are used to build improvements on those worlds, like special factories that increase energy production or the installation of planetary defense craft. Science is used to conduct research that improves the quality of starship systems like weapons, engines, and stealth technology. Energy is used to build and repair ships in the fleet. 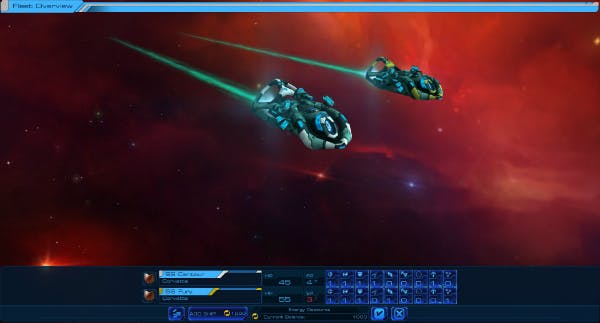 Where these starting choices and resource management are put toward the development of an entire civilization in the Civ games, in the aptly-named Starships all that truly matters is your fleet. The player controls only a single fleet during the course of the entire game. The fleet is like a “stack of death” in the older Civ games, a group of military units that occupy a single hex and move in unison.

The player can add new ships to the fleet or improve the ships that are already in the formation. A ship may begin as a small corvette in the early turns, but evolve into a battleship bristling with guns before the end of the game as the player upgrades the ship’s engines, armor, shields, and a suite of weapons, sensor, and stealth systems. 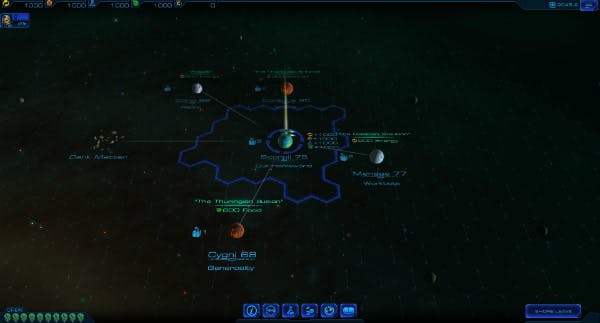 The strategic portion of Starships takes place on a hex map of space filled with planets to discover. Visiting a planet that is not part of the player’s federation triggers a space battle.

During each turn, a fleet can move from planet to planet and engage in battles several times before the fleet’s crew becomes too exhausted to undertake another journey. Then the player has to take Shore Leave, at which point the turn ends. Taking shore leave on a neutral world also increases the influence of the player’s Federation upon that world. The player can also outright buy influence using currency.

Once a planet joins your Federation, you can build a Wonder on that world. The construction of the Wonder is instant provided the requisite resources are available, and each Wonder lends advantages to the ships in your fleet. Some of these advantages are decisive, like being able to take advantage of a fighter wing’s full range of movement on the turn they launch, instead of having to wait another turn for the vulnerable fighters to move. And having a crew that performs at top efficiency no matter how tired they are effectively lengthens the players’ turn.

The diplomacy in Starships that becomes available when another Federation reveals itself on the strategic map is rudimentary. You can ask for peace or declare war, and that’s about it. Ambassadors will tell you about the worlds in their Federation and reveal what they’ve been up to, like building ships and adding planetary improvements, even when you are at war with them. That felt very odd. “Hey, we’re killing each other in space at the moment, but check out our daily news!” 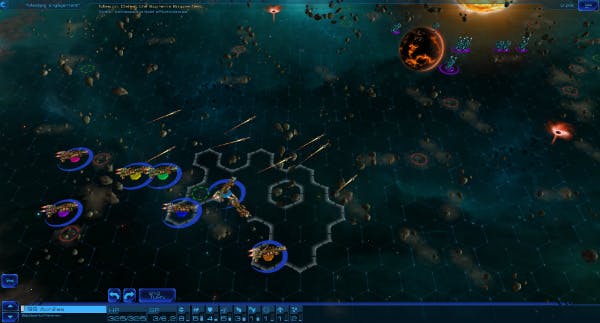 When a mission begins, the game transitions to a tactical map that represents the space around the planet where the mission is located. Planets, moons, asteroids, and Jump Gates are the basic terrain types.

Planets, moons, and asteroids block your line of sight and thus provide cover. Fly a ship into the mouth of one Jump Gate, and the ship pops out at another randomly selected Jump Gate somewhere else on the map.

Some areas of space have unique properties, like magnetic fields that make shields more effective or dense microparticles that cause damage to a ship for each hex it moves. A planet might have a ring of space debris, or the asteroid fields on the map may slowly dissipate over time.

I found that the terrain on the maps meant very little, however, in the face of how torpedoes work in Starships. The only thing I ever found that a torpedo could run into was a planet or a moon. Otherwise, torpedoes ignore every other terrain type as they speed toward their targets.

Torpedoes in Starships are dumb-fire, which is to say you choose the flight path for the torpedo and let it fly. The torpedo arms itself at the beginning of the following turn. The player may then either detonate the torpedo where it sits or let the torpedo continue to run its course, manually detonating it wherever you want to target.

When you have a fleet of five or more starships all armed with torpedoes, the torpedoes become a stupidly effective area denial device because they ignore cover. Starships staring in the face of an incoming fusillade of torpedoes have no choice but to evacuate the area in front of a torpedo’s approach. That certainly means giving up the initiative in terms of dictating the direction in which the battle spreads and where confrontations ultimately take place on the map.

Fleeing from a torpedo also means turning your back on your opponents, which is a death sentence in Starships because every starship’s shields are weakest in their rear quarter. In late game, if you have more than one torpedo on every ship in your fleet, you can use torpedoes to figuratively herd the enemy fleet where you want it, and pick the enemy apart.

This was interesting the first few times I tried it, and then it quickly got boring. It was too effective a tactic not to use over and over again, however, if I wanted to make sure I passed each mission. 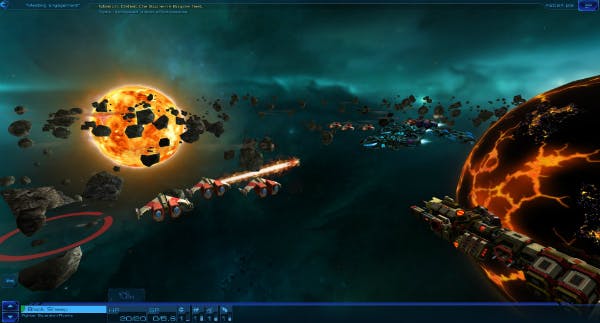 Fighter craft in space-fleet games are usually defined by high damage output coupled with extremely low tolerance for taking damage, and fighters in Starships hold to the traditional formula. They are also obscenely powerful when used properly.

For one, you don’t need to build anything akin to a Carrier-class ship to deploy fighters. Any ship in the fleet can field multiple squadrons of fighter craft. You can choke space with fighters very early in the game if you devote your ship improvements toward that goal.

Up through the middle difficulty settings, enemy ships will almost always prioritize fighters over capital ships. So imagine firing a wide spread of torpedoes at the enemy, and then launching multiple fighter wings. First the enemy has to dodge the torpedoes. Then they prioritize taking down the fighters. By the time the torpedoes have detonated and your fighter screen has been destroyed, you’re right on top of the enemy and probably get the first turn in the close-quarters battle that ensues.

It would be one thing if replacing spent torpedoes and destroyed fighter craft cost resources, but they don’t. At the beginning of every battle your complement of torpedoes and fighters is fully refilled, free of charge. There’s no reason not to pursue these kinds of tactics, especially as their effectiveness only improves as you research increased torpedo damage and special technology for your fighter squadrons.

Losing a battle means losing influence over a planet, but it never means losing any of your starships. You may get to a point where you lack the resources to repair your ships, but that’s it. As the owner of a fleet, this is a boon. When it comes to taking on enemy Federations, however, it becomes a repetitive nightmare because you essentially fight precisely the same enemy fleet over and over and over again while you rampage through enemy territory. 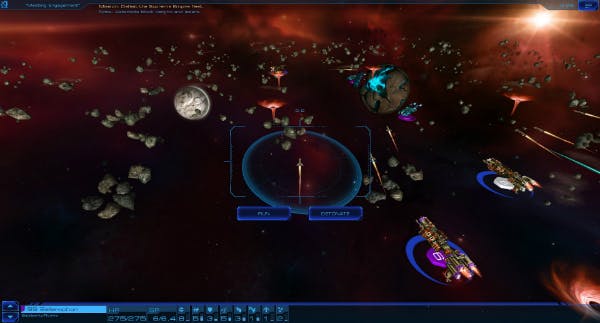 The missions I enjoyed the most were the missions that only allowed me to bring my flagship into battle. The basic tactics at my disposal were no different, but there was also no room for error. The single-ship missions ultimately helped me realize just how rote and predictable the full-fleet missions were.

It doesn’t matter where your fleet is positioned on the strategic map, if an enemy fleet attacks one of your worlds. Your fleet will always arrive to save the day, albeit one ship at a time. Investing in planetary defenses makes little sense when you know your fleet is always effectively everywhere. Worrying about borders can begin to feel silly.

When you encounter a neutral world, it takes several missions to sway them over to your Federation. When you defeat an enemy Federation’s fleet for one of its worlds, that world joins your Federation immediately.

To call these populations “fickle” would be a colossal understatement. This makes it far too easy to conquer enemy systems and knock other Federations out of the game, especially as you learn how to pick apart the same enemy fleet that you fight over and over again.

Cranking up the difficulty in Starships and thereby eliminating the margin for error can address shortcomings of the tactical mode, but the strategic mode will always remain simple. Hence the feeling that Starships is more like a mini-game than a fully-fledged title, an observation held up by the game’s low asking price of $15.

It’s perfect on your iPad while running errands with the family, but merely a morsel while sitting at the PC where any number of more satisfying strategy games in Sid Meier’s lineage await you.