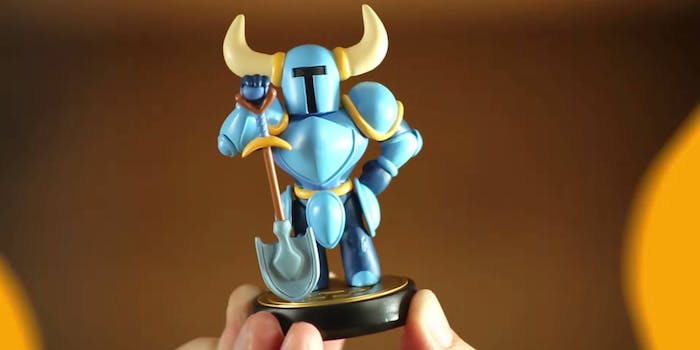 Indie darling Shovel Knight will get its very own Amiibo

It's a first for an indie game.

During the PAX 2015 Nindies at Night pre-show event, Nintendo revealed that the blue armored hero will be getting his very own Amiibo figurine. This is the first character from a third-party indie game to get its own Amiibo.

Amiibo are Nintendo’s answer to Skylanders and Disney Infinity. It’s a figure that can interact with Wii U and 3DS games.

The trailer features YouTube gaming comedy channel Game Grumps, and with it comes their corny sense of filming and humor.

The new Amiibo also adds a new feature to Shovel Knight. Players will be able to tackle games in co-op. It will also include a new challenge mode. Both features are exclusive to the Wii U and 3DS versions of the game.

We have a strong feeling that this Amiibo will sell out quickly, making the new in-game features difficult to unlock for many. That’s assuming Yacht Club Games doesn’t decide to sell the feature separately in the future.

A release date was not given, but information has leaked from retailers suggesting a November time-frame. The Plague of Shadows DLC is also set to come out this September. Shovel Knight is already out digitally and will be getting a physical release on Oct. 13.