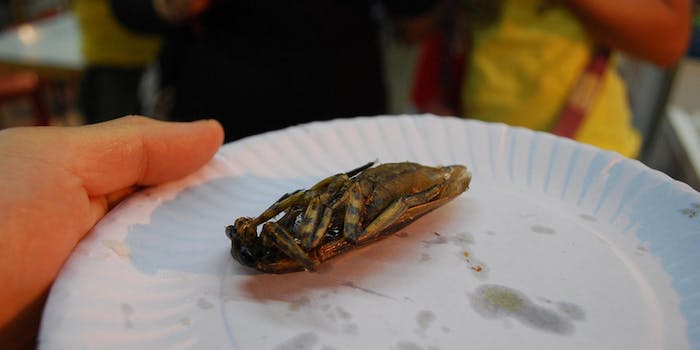 Most of the world does eat insects, so why don't we?

The wholesale market outside of Bangkok, Thailand was a feast for my ears, eyes and nose. Now I had a chance to spread the wealth to my tongue. A woman with twinkling eyes was watched me contemplate her artfully piled wares and motioned that I should take a sample. The choices? Fried silkworm pupae and grasshoppers. I went with the pupae because navigating legs seemed like a challenge. Don’t think, pop it in. It tasted like shrimp, yummy shrimp.

My insect eating-adventure was brief but it converted me to an advocate for bug consumption, or entomophagy. There are many reasons to eat bugs, as Mitchell Moffit and Gregory Brown, the excellent guys behind AsapSCIENCE, explain in their new video:

“Compare 100 grams of crickets to 100 grams of chicken, beef or pork and you’ll find that they have similar protein content but crickets are much higher in essential vitamins and minerals such as calcium, zinc and iron,” Moffit explains in the video. Insects can offer an important source of animal protein on less land, a fraction of the water, and cut down on agriculture’s contribution to greenhouse gas emissions, according to a 2010 study in PLoS ONE.

The ‘ew, bugs!’ attitude toward the food on our plate is a fairly recent Western and European notion. Europe’s colder winters likely keep the juicy insects to a minimum and so they never became a large part of the diet. But people around the world consume insects as food. The Food and Agricultural Organization of the United Nations estimates that more than 2 billion people around the globe incorporate insects and other bugs into their traditional diets.

Humans on the whole love to eat insects, arachnids and crustaceans. We munch on mealworms, chew on cicadas, gulp down grasshoppers and even snack on scorpions–to name some of the most popular bugs we eat.

The idea that one food item can be gross and another a delicacy breaks down under scrutiny. Consider the lobster, an expensive option while dining out today. In America’s early days, these crustaceans were so abundant that they were considered a poor man’s dinner. “In 1622, the governor of Plymouth Plantation, William Bradford, was embarrassed to admit to newly arrived colonists that the only food they ‘could presente their friends with was a lobster … without bread or anyhting else but a cupp of fair water’ (original spelling preserved),” according to an article by Daniel Luzer in The Pacific Standard.

Sushi has also morphed from strange food to a favorite in America and the world beyond Japan. Insects could do the same: One London-based startup has a plan to make insects more socially palatable by imitating the attractive presentation of bento boxes with their “Ento boxes” featuring insects.

Still not convinced? Too bad. You are already eating bugs. The sheer abundance of creepy crawlies makes it impossible to keep them out of our food. The Food and Drug Administration sets thresholds for the amount of bug they will tolerate. For example, peanut butter can have up to 30 insect bits (heads, bodies, legs, antennae, etc.) per 100 grams.

Now that you are properly introduced to the whys of bug-eating, order your cricket powder and mealworms online, whip up a gourmet meal, and dig in.