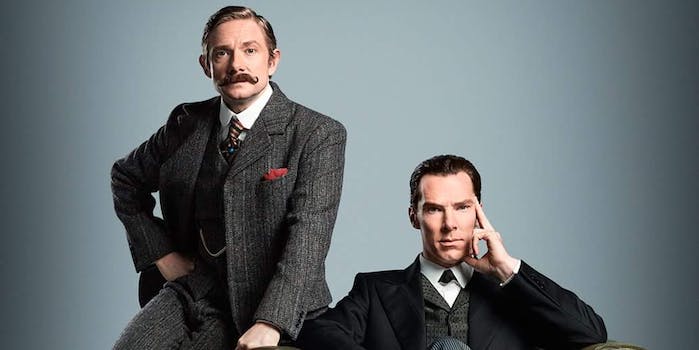 They look as charming as ever.

The Sherlock special may not be airing until later this year, but Christmas came early for fans on Wednesday with the release of the first official look at the crime-solving duo.

Sherlock writer and star Mark Gatiss teased fans on Twitter Wednesday, hinting that there would be a treat landing at midnight U.K. time (7pm ET). Although many fans were hoping for a trailer, the tease came in another form: a new, official photo of Sherlock Holmes and John Watson in all of their Victorian-era glory.

Showrunner Steven Moffat already confirmed back in March that the Sherlock special would take place in the 19th century and would be “kind of in its own bubble,” allowing Benedict Cumberbatch and Martin Freeman to play the original incarnations of their characters. After that, the show’s fourth season will return to its modern-day London roots.

Between #Setlock and another preview of Sherlock and Watson in Victorian garb, this won’t come as much of a surprise to fans. But the picture—or rather, the portrait—is a fitting one. Neither of them are smiling, as was the custom for photos taken around that time, but we can also appreciate Watson’s mustache (an improvement over his first one), and Sherlock’s hand gesture looks like he’s about to enter his mind palace—or Cumberbatch is already practicing for Doctor Strange.

The Sherlock special will air sometime this winter, while the show’s fourth season still has no premiere date.