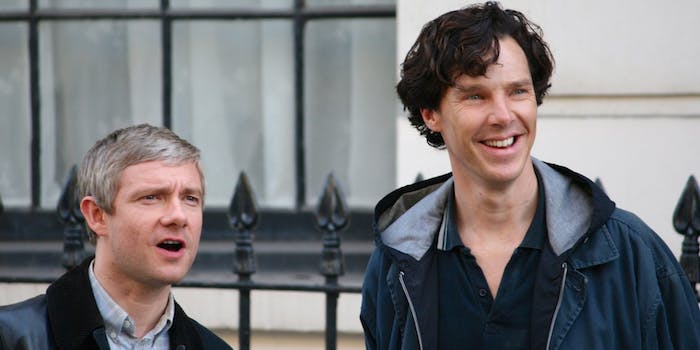 ‘Sherlock’ fans could be getting a Christmas special after all

But it's going to be a long, long wait.

You know how the gap between new seasons of Sherlock always feels long enough for entire civilizations to rise and fall? Well, that’s probably going to happen again.

The latest word from Martin Freeman is that Sherlock will return for a one-off Christmas special in 2015. He had already hinted that a Christmas episode might be in the works, but fans were obviously hoping for it to be in 2014. Sadly, that was an unrealistically short timeframe for Sherlock’s glacially slow production speed.

“If that’s going to be a special… I think that might be for next Christmas. A Christmas special. That’s what I understand,” Freeman told the Telegraph.

He added that thanks to the busy schedules of Sherlock’s main actors, they wouldn’t have time to film anything until 2015. The good news is that while it takes years for any new episodes to show up, Freeman says that he’s definitely interested in continuing with the series “for the foreseeable future.”

Reactions from Sherlock fans are mixed, to say the least. A new episode is obviously good news, but what about Season 4? Will there be another two-year wait before that gets filmed? Will a single Christmas episode be enough to stop Tumblr from going off the deep end?

wtf ok we’re getting a sherlock christmas special but that doesn’t mean they’re not giving us series 4 right?? pls I’ll kill them all

Here goes to another year crying over the Sherlock Christmas special

Still, it’s not like Sherlock fans don’t have practice at enduring this kind of lengthy hiatus. To put things into perspective, Martin Freeman had time to put out two entire Hobbit movies in the gap between Seasons 2 and 3.

As for the plot of the Christmas special, that’s anyone’s guess. Although we’re going to go out on a limb and assume that it’s not this:

In the same interview, Freeman mentioned his suspicion that Watson’s wife Mary is doomed, because she does die in the original Holmes stories.

“While we play fast and loose with the original stories, we generally follow the trajectory of what Conan Doyle did. So [Watson] gets married, and then Mary dies – so at some point presumably she’ll die.”

Mary Watson fans should take that last part with a pinch of salt, though. Martin Freeman isn’t the showrunner, and we’re talking about a Sherlock Holmes adaptation that turned the Hound of the Baskervilles into part of an X-Files-style military experiment. Either way, we doubt that Steven Moffat would kill off a beloved character at Christmas.