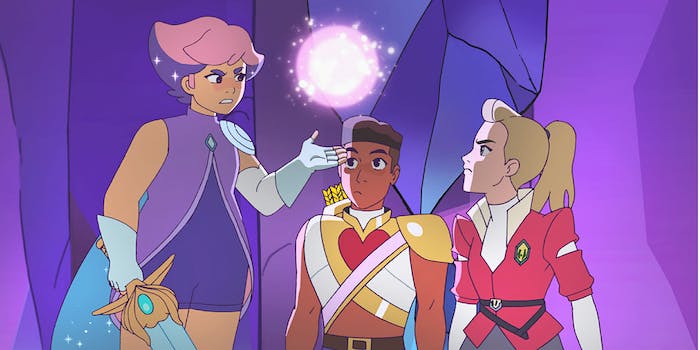 'I think it's definitely She-Ra's mission to reflect and represent reality.'

The New York Comic Con panel for Netflix’s She-Ra and the Princesses of Power reboot gave fans an in-depth look at what the show had to offer, including multiple clips from the show’s first episode. But even with its fantasy setting, the show is still trying to reflect reality in a way that’s revolutionary for animation.

During the panel, Aimee Carrero—the voice of Adora, who in the show discovers the sword that transforms her into She-Ra—accidentally let slip that Bow, an archer who befriends Adora, has two dads. Carrero later explained that she wasn’t thinking about it in terms of a spoiler or a big reveal when she said it.

“It was so funny because I wasn’t even thinking about it,” Carrero told reporters during a roundtable interview after the panel. “It wasn’t like, ‘News!’ In my mind, the characters—which you’ll meet, and I won’t say anything else about them—but they are so funny and nuanced and interesting, so I was just thinking of like, who Bow becomes around them and that’s why I love them.”

According to executive producer Noelle Stevenson, those kinds of gender dynamics among characters in Eternia (the world in which She-Ra takes place) are normal.

“I think it’s definitely She-Ra‘s mission to reflect and represent reality, and I think two dads is not an uncommon thing in this world and it should be celebrated,” said Marcus Scribner, who voices Bow in She-Ra.

“I think it’s important to represent everyday people and you know, two dads is something that isn’t seen so much on television. It’s not a common thing that we see, and I love that you said we celebrate it because we definitely do,” added Karen Fukuhara, the voice of Glimmer.

Although TV as a whole has become more inclusive in recent years, LGBTQ representation still has a long way to go—and even more so in animation. In this subsection, LGBTQ characters are even rarer, with any kind of relationship relegated to subtext or confirmed after the fact for fear of backlash from parents or restrictions due to international distributors.

Attempts by creators to insert LGBTQ characters into their own shows have been met with pushback or censorship from networks. It took until 2018 to see a same-sex proposal and wedding in animation. But even when it does happen, it can come with its own complications, such as the emergence of the “bury your gays” trope. And while Stevenson noted that the characters in She-Ra will face danger, she’s also aware of some of the “pitfalls” that might arise in storytelling that happens to involve LGBTQ characters.

“It is very important to me to include representation and to make LGBTQ viewers feel very safe and protected,” Stevenson said. “It doesn’t mean that the characters will always be happy, it doesn’t always mean things will work out. It means that I want to tell the stories that are important to me and that I hope are important to other viewers while dodging pitfalls that can be upsetting or harmful to certain viewers who are marginalized.”

Stevenson stressed that She-Ra is largely about the different kinds of relationships in the lives of these characters. Each of those relationships—familial, friendships, and romantic—are given equal weight and get explored.

The dynamics between Adora and Catra (with whom she grew up training to fight in the Evil Horde) and Bow and Glimmer are among the show’s core relationships, but they’re far from the only ones we’ll see. Part of season 1 involves the characters attempting to reorganize the Princess Alliance to fight against the Evil Horde, which will bring another dynamic to the show: a group of powerful women teaming up and working together.

She-Ra and the Princesses of Power debuts on Netflix on Nov. 16.