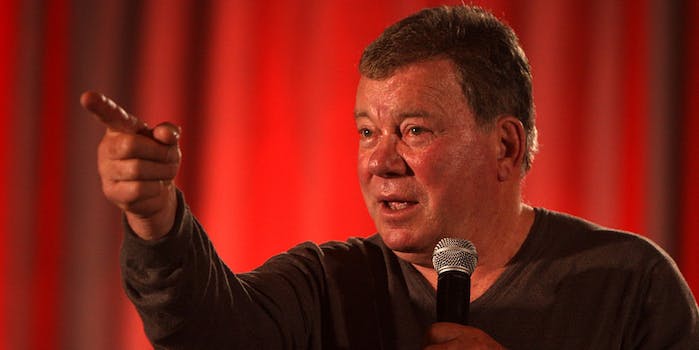 Could William Shatner be in the third ‘Star Trek’ reboot film?

J.J. Abrams has finally called on Shatner for a Kirk/Spock reunion.

Congratulations, Trekkies. You may finally be getting an on-screen reunion between Leonard Nimoy’s Spock and William Shatner’s Kirk—but not until 2016 if at all.

Saturday while appearing at Nashville Comic Con, Shatner confirmed that Trek reboot commander J.J. Abrams had recently contacted him about the possibiliy of doing a reunion scene for the third movie in the franchise’s reboot series.

According to Shatner, Abrams informed him that screenwriter and director of the third film, Roberto Orci, had an idea for a way to reunite the classic Trek duo. Shatner told audiences at the con that he’d be “delighted” to do the project if the scene was “meaningful.”

Initially, amid a swirl of rumors last week about his possible involvement, Shatner had vehemently denied everything.

Let’s talk ST. I don’t know anything about the current gossip. Nobody has contacted me. Right now it’s just rhetoric to cause hype.

But he seemed to reverse course during the panel, possibly because he thought Orci himself had already confirmed it. In fact, while the rumor had originally come from Badass Digest’s Devin Faraci, Orci had commented on TrekMovie.com to state that he could neither confirm or deny.

Here’s the full transcript of Shatner’s comments in Nasvhille:

The weirdest thing has happened and I think I can tell you because it is so weird. So I’m in Australia a couple of weeks ago…and JJ Abrams calls me. He called me in Los Angeles and I’m not there, so my assistant calls me and says “JJ called and is going to call back.” I said “great” and hung up the phone “I wonder what JJ wants?” Because the last time I talked to JJ was before the first movie came out and I went to meet him at his office and he said “are you interested in being in the Star Trek movie?” “And I would play the captain?” “No, no. Not as Captain Kirk. We have a young, handsome guy to do that.” But he handed a script and I read it, and it stunk…It is like telling people “You know that little cute baby you got there. It is the ugliest thing I have ever seen!” So I didn’t say that to JJ. This is the worst script I have ever read and it is the next Star Trek movie and the beginning of the whole thing and it was awful! Turns out it wasn’t the script at all…He was assessing whether people were interested in being in the movie and handing them a dummy script because the final movie was really good, but it wasn’t the script that I read.

So now I get this call and he is going to call me back and a week and a half goes by and he never called me. I wonder if he is going to call me? Maybe it is a trick? Maybe it is TMZ? Could he be that cruel. So he calls and says “I’m calling, Bill, because the director of the Star Trek movie, the next one, has had an idea where you might be involved in it. So I am calling to see if you would be interested.” I said “Oh, yeah. If it is meaningful.” When Leonard was Spock in that first movie, I said to Leonard “you know when you go back in time you are still old.” So it depends on what you do with the character. I said “I would be delighted.” And he said “you can’t say anything.” And I said “I wont even tell my wife. I wont tell anyone. I wouldn’t do that, JJ.”

So I get back from Australia and it is all over the Internet, that the director held an interview and said they wanted Shatner and Nimoy to be in the next movie. I bet JJ is frothing at the mouth. So the news is out that they have an idea that they want Leonard and myself. They might want Leonard and myself. I don’t know what to do with it. How do you get me fifty years later into the movie…I know it’s science fiction, but even I couldn’t come up with an idea.

There are still a lot of “maybes” attached to the project. For starters, now that Shatner has apparently let the cat out of the bag, Abrams and Orci could call the whole thing off.

For another, the film is still in pre-production mode, so the script is probably nowhere near final and anything could happen. Not to mention, both Nimoy and Shatner would have to make it work with their ever-busy schedules.

Meanwhile, fans who are holding out for a classic Trek reunion still have another missing bridgeperson. George Takei has been quoted as saying that all Abrams and Orci have to do is ask, but as far as we know, his phone has stayed silent.

Pick up the phone, J.J.—we’re waiting.