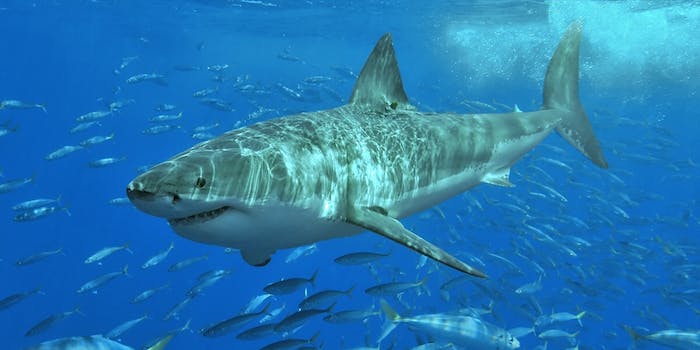 In its 28-year-long run, Discovery Channel’s annual celebration of sharks, has run into some choppy waters.

Scientists and conservationists alike have criticized Shark Week for focusing on promoting the image of sharks as maneaters and monsters, while ignoring important threats to sharks like climate change, culling, and finning. The criticism hit its fever pitch in 2014 when the channel aired a special that had all the trappings of a real documentary about scientists searching for a megalodon, a long-extinct bus-sized species of shark. The documentary was totally fake, but it seemed real enough that a large chunk of viewers actually believed there was a possibility that the megalodon still lived and lurked in the oceans.

This year, Discovery Channel’s CEO Rich Ross said that Shark Week will do better and stick to facts about sharks, instead of perpetuating harmful myths. But take a look at this year’s lineup and you’ll see that sensationalism still sells with shows like “Return of the Great White Serial Killer.” On the other hand, “Alien Sharks” and “Shark Planet” look like they may be more educational, shining the spotlight on the many species of sharks that are smaller, weirder, and altogether not terrifying.

In the spirit of science, environmentalism, and promoting real shark facts, here’s a list of online resources in no particular order. These were selected based on their scientific content and their appeal to a general audience. All of these sources are great places to learn about what we really know about these predators, their role in the ocean, and how we can protect them.

If you want to know everything that Shark Week gets right and wrong, and learn true facts about sharks at the same time, David Shiffman is your guy. Shiffman is a Ph.D. candidate studying shark ecology at the University of Miami, and he’s one of the most vocal and impassioned critics of Shark Week. His article for Vox, “Shark Week is upon us. And as a shark scientist, I both love and hate it,” is an excellent summary of the problematic history of Shark Week, and how it mischaracterizes the species that are in need of our protection. He has a seemingly encyclopedic knowledge of past Shark Week specials, and is quick to point out inconsistencies in the televised event while helpfully debunking myths that the shows perpetuate. Of course, he also highlights times when Shark Week gets things right, as well. His lively twitter @WhySharksMatter is often a venue for conversations and impromptu interviews about the importance of shark conservation. But his blog, Southern Fried Science, is where you’ll find some of the most comprehensive, easy-to-understand, and accurate information on sharks. He also helps put shark conservation in context; explaining how protecting sharks can not just protect the oceans at large, but the livelihoods that depend on them. The blog is also host to guest writers, so you’re not just getting one person’s perspective.

The University of Miami is one of the foremost institutions for marine biology and ecology research. The website for their R.J. Dunlap Marine Conservation Program isn’t just for prospective students; it’s also for folks interested in learning more about marine ecology and research. Check out their virtual learning section for interactive games like “shark expedition.” You can also track sharks the researchers there have tagged on Google Earth. Their blog is a great place to keep up with the activities of the students and scientists at the institution, as well as see with their latest research results.

SharkSavers is a branch of the massive conservation nonprofit, WildAid. They have multiple programs aimed at saving all species of cartilaginous fish (including manta rays and skates). But their education page is an excellent place to get basic, introductory information on all things shark. They also debunk a lot of myths like that sharks don’t get cancer (they do), as well as interesting facts like that sharks have extra senses beyond just sight, smell, taste, hearing, and touch. From their biology to their role as top predators in a complex ecosystem, to how humans threaten them from finning and culling, SharkSavers has the information you need.

For our west-coast readers, they may enjoy a mobile app called SharkNet, which tracks white sharks on the California coast in near real time. The app was developed by Stanford researchers who wanted to keep track of the comings and goings of sharks on the Western coast of the United States, but they also wanted to give landlubbers a way to feel connected to the sharks and their home in the ocean. Each shark has its own profile and photos where users can learn about its life history and how to identify it.

The Fossil Guy is a website devoted to paleontology, but has a lot of great pages devoted to sharks—particularly the extinct megalodon. The size of the megalodon is actually subject to debate because shark skeletons don’t fossilize well. There is very little in the fossil record to go on besides teeth. But beyond the megalodon, the Fossil Guy also has information on white sharks, mako sharks, and aptly named goblin shark. The info is from a paleontologist’s perspective, so if you want to learn about the fossil history of sharks and their evolution, check out Fossil Guy.

Of course you can check out Blue Planet among other BBC documentaries to catch glimpses of sharks, but if you want some truly shark-centric documentaries, Netflix has two titles to offer:

Sharks of the Mediterranean: a Vanishing Kingdom

This documentary is pretty light on science, but is nonetheless is an interesting film worth watching. We follow French oceanographer Francois Sarano as he tries to find out what became of a once-thriving population of sharks in the Mediterranean Sea. While you may not learn many shark facts in this documentary, it will show you the more graceful and elegant side of sharks in the many diving scenes.

Search for the Great Sharks: IMAX

This 1995 IMAX documentary has one goal: Dispel the myth of sharks as aggressive killing machines. Instead, the documentary’s many scientists showcase the way these exquisitely constructed fish are nature’s ultimate predator. A little cheesy, but a good show for older kids who aren’t too squeamish.

There are a few Instagram accounts devoted to photos of sharks, but I enjoy iphotographsharks the most because the photographer posts interesting facts about sharks along with his beautiful photos. Most of the images are taken off the Guadalupe Islands and are of white sharks, but if you’re looking to delight your eyes and your mind at the same time, check it out.

Deep Sea News lives up to its name and is a great place to keep up with marine research. With articles written by scientists and educated communicators, you can be sure you’ll be getting accurate, detailed information targeted at a knowledgeable audience. This is next-level shark info, allowing you to peer into the chatter that goes on between scientists and conservationists. While they cover all things ocean, there are frequently articles devoted to sharks.

This South Africa-based news website is geared toward a more general audience. With great images, videos, and lively prose, it’s a fun website to keep up with conservation news. It frequently covers stories about sharks among other animals. And now’s a great time to start following along. In honor of Shark Week, it’s been running shark-themed articles and Q&As with shark researchers.

This website is one of the most foremost websites for conservation and environmentalism news, for those in the know. The news draws from research papers and other scientifically backed sources. Though shark articles are less common than rainforest-focused articles on this site, its extensive backlog of shark-centered stories provides for plenty of reading material. A great place to catch up with important discoveries and advances in shark research, Mongabay.com is a site anyone concerned with conservation and environmentalism should visit regularly.

Image via Terry Goss/Wikimedia (CC BY 3.0)