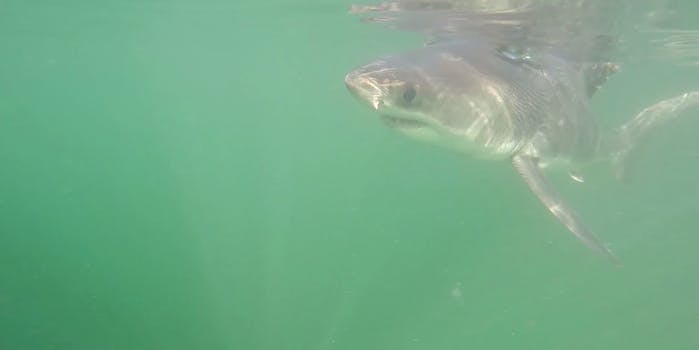 Talk about your close encounters.

Patrick Anders Webster got quite a surprise—and some amazing footage—when he recently found a juvenile Great White shark swimming in a warf off of Monterey Bay.

Webster submerged his camera into the blue waters in Monterey Bay to suddenly find a rather photogenic shark. As he surfaces the camera to catch the shark’s fin slicing through the water, you can see tourists gathered on a nearby dock watching the scene unfold.

The sighting even caught the attention of the Monterey Bay Aquarium.

It looks like Webster got lucky and shared his encounter with a rather lethargic shark, unlike Terry Tufferson, who scrambled to get away from a full-sized Great White back in June. Then again, you’d be hard-pressed to find any creature—human or shark—angry or irritable in Monterey Bay.