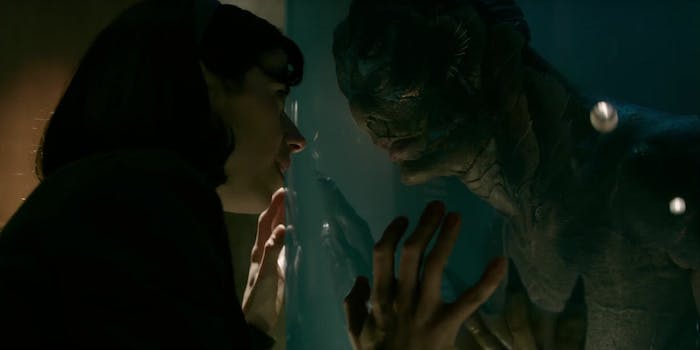 While some people were turned off by Guillermo Del Toro’s love story between a woman and a fishman in his Oscar-nominated film The Shape of Water, plenty of fans were absolutely smitten. And not just with the charming story. Some saw the tender-yet-animalistic fish dude and thought, “Yeah, I’d go there.”

Lucky for them, specialty science-fiction and fantasy sex toy maker XenoCatArtifacts has revealed a new product that interprets what the fishman’s, ahem, rod and tackle would look like.

To be clear, the movie never shows the fishman’s equipment. But the romance between Elisa, a mute custodian tasked with cleaning a government lab, and the creature is definitely consummated. Elisa even explains to her friend how it works using hand motions, suggesting the flat-fronted creature “unsheaths” from an opening in his crotch. It’s kind of like how real-life sharks work. (Google it.)

XenoCatArtifact’s interpretation, called “Jewel of the Amazon,” looks like it’d be pretty accurate. It’s made from platinum-grade silicone and the base even glows in the dark.

“The toy itself is just gorgeous,” wrote one happy customer on XenoCatArtifact’s Etsy page. “Beautiful sculpt and the colors are wonderful, XCA really went above and beyond to create something nice to look at AND to use. The silicone is soft enough so that the ridged fins don’t feel as harsh as they look.”

The item is so popular it has already sold out, but XenoCatArtifacts promises to have more in stock in time for the Oscars.