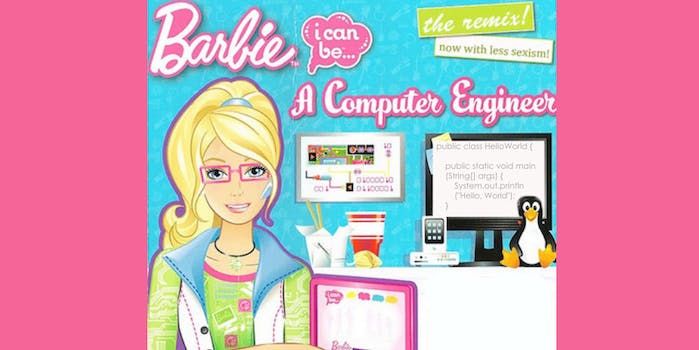 When Casey Fiesler and Miranda Parker heard about the shockingly sexist Barbie book Barbie: I Can Be a Computer Engineer, which actually teaches girls that they can’t be real engineers, the two roommates took matters into their own hands. Both had particular reasons to despise the book’s message: Parker is a computer education student specializing in broadening participation in STEM-related academic programs and careers, while Fiesler is a doctoral student in human-centered computing.

Using their combined knowledge and powers of feminism, Feisler remixed the entire book, turning Barbie: I Really Can Be a Computer Engineer into a fantastic and empowering response to the regressive, stereotyped original. In the original book, which went viral yesterday after flying under the radar for a year, Barbie informs her readers that she’s just designing her new game, which resembles the kind of mobile game frequently stereotyped as frivolous and girly. She says she’ll need her friends, both boys, to actually code the thing for her: 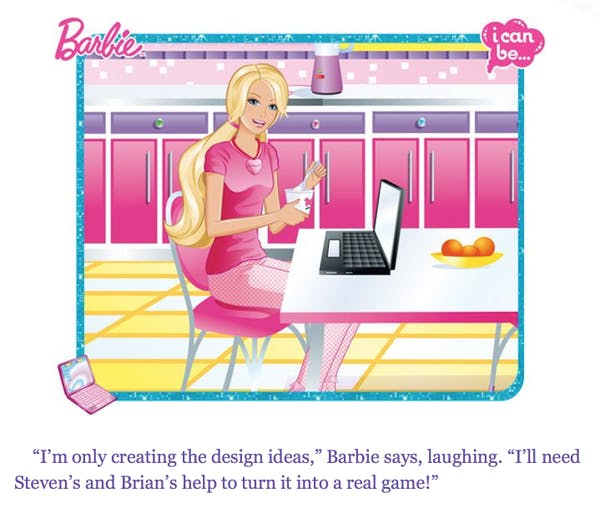 Fiesler’s revamp highlights how absurd this level of gender stereotyping is. Here’s her rewritten description of how games are made:

“Really good games are made by a team of people. I’m doing some of the coding now, but Stephen and Brian are helping, too. There are lots of pieces to making a game, like art and music and storyline. Brian drew that puppy. You’re a good artist, Skipper. Maybe you could be a graphic designer when you grow up.”

Skipper grins. “I love art, but I really love science, too. Physics is my favorite class. I think I want to be a physicist.”

The best part of the whole book is the way Fiesler transforms the scene where Barbie oafishly infects her computer with a virus, then cluelessly infects her sister’s hard drive, causing her to lose her homework assignment as well as all her music files. In the remixed version, Barbie’s computer is hit with a much more pernicious virus, and not one she’s responsible for passing on—sexism. When Skipper learns her love of science may make her vulnerable to harassment, Barbie tells her not to give up. “Skipper,” says our pink-clad heroine, “you can’t let sexism stop you from pursuing science. We need more women scientists. You’re just the type of person who can make a difference!”

Next they talk about how easily stereotyped they are because they both love pink and like “girly” things. They agree to keep liking all of the above, because “you can like pink and be a really good programmer.” Elle Woods couldn’t have said it better herself. At school, the female bonding continues, as Barbie gets some wisdom and encouragement from her computer science teacher, who decided to teach so she could encourage other girls to get into STEM careers. And then, of course, who should open his big dumb mouth but fedora-wearing Gamergater Ken:

“If girls start making video games, they’ll take out all the hot chicks,” mutters Ken. “And they’ll all be about puppies and picking out hairstyles.”

“Don’t be a moron, Ken,”says Barbie. “You spend more time on your hair than I do.”

Other proud geek girls reacted to the Barbie book with snarky Amazon reviews—over 70 were added to the site yesterday alone. Some produced Twitter remixes. Brianna Wu‘s reaction took the form of parody.

Fiesler gave us a glorious downloadable PDF of her version, which everyone should read. And fellow geek girl Kathleen Tuite created an amazing Barbie Computer Engineer Remix Generator that lets anyone create their own version of the pages. Already the submissions are rolling in, turning Barbie into a Linux fan, a GitHub user, and, well, a Lovecraftian Eldritch horror.

The outpouring of creative energy in response to the book ultimately proves that efforts to gender-stereotype toys and other products for children are wasted. Clearly, trying to tell these geek girls they can’t code has only made them bounce back, more powerful than ever.