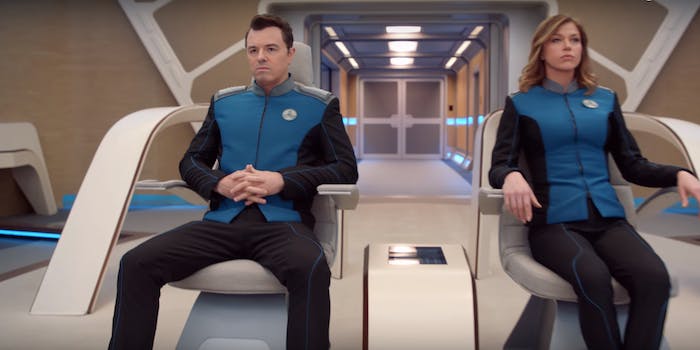 Apparently now is the time for a 'Star Trek' spoof from the creator of 'Family Guy.'

Seth MacFarlane is going where no man has gone: a Star Trek parody sitcom.

The Orville stars MacFarlane, the creator of Family Guy and American Dad as the doofus captain of a Starfleet-style spaceship. The first trailer is upfront about the show’s Star Trek roots, with familiar-looking costumes, set design, and sci-fi scenarios. (You may also recognize actress Penny Johnson Jerald, who played Kasidy Yates in Star Trek: Deep Space Nine.)

The show features a very MacFarlane-ish sense of humor, launching straight in with a joke about leaving the toilet seat up, and an ongoing storyline about the captain having to share command with his ex-wife (Adrianne Palicki). Galaxy Quest, this is not.

In case you’re wondering: Yes, you’re allowed to be annoyed that this show released a trailer before Star Trek: Discovery.