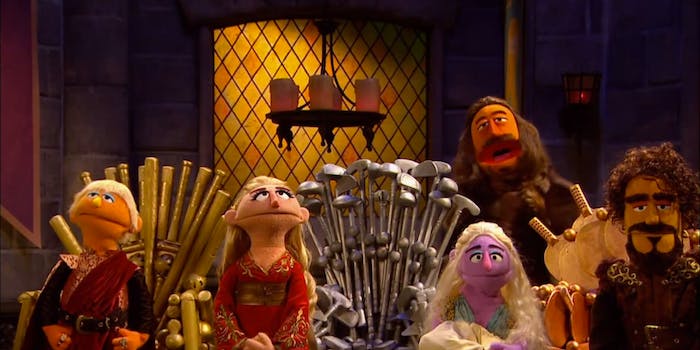 ‘Sesame Street’ turns its whimsical attention to ‘Game of Thrones’

'The monster is blue and full of errors.'

In the game of chairs, you either win or you lose—and then you get to go home. It’s actually pretty nice.

When Sesame Street takes on Game of Thrones, there’s 100 percent fewer boobs and about 90 percent less violence, but it’s just as absurd as the real thing.

In the latest parody video from the fine folks at Sesame Street, there is a huge game of musical chairs to determine the new king or queen of Jesteros, and like all attempts to take the throne it goes horribly wrong. There are plenty of winks to the real show, your favorites lose early on, and Ned and Grover Bluejoy (the stand-in for Theon Greyjoy) pretty much ruin everything. Everyone ends up miserable, and the chair’s not even that comfortable anyway—just like on Game of Thrones!