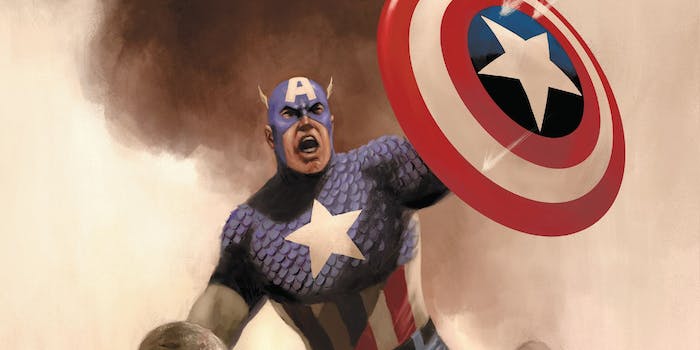 You probably saw this coming.

The storyline began with Captain America: Steve Rogers last year, unveiling Cap as a secret Hydra agent. His history had been rewritten by the Cosmic Cube, creating a new timeline where he was a member of Hydra since childhood. Marvel said this controversial storyline wasn’t a fake-out, but Secret Empire #2 suggests otherwise.

As it stands, Steve Rogers is the Supreme Leader of a fascist Hydra dictatorship. The remaining Avengers formed an underground resistance movement, and in issue #2, they learn the secret behind Cap’s rewritten backstory. Then, in an unrelated scene on the comic’s final page, this happens:

We don’t know where this version of Steve Rogers came from, but now that he’s here, Secret Empire could end with him replacing (and/or killing off) Hydra Cap. It’s a predictable kind of plot twist for superhero comics, and exactly the thing Marvel said they wouldn’t do with Secret Empire.

Secret Empire has the same basic structure as any other event comic. It’s an attention-grabbing story that creates a few temporary changes to the Marvel Universe, but most characters will return to normal once it’s over. (After all, no one really thought Captain America would be Hydra forever.) The difference is, Secret Empire‘s criticism is more political than the typical fuss over superhero plot twists. To deal with the resulting backlash, Marvel had to contradict its own marketing for the comic.

Why Marvel keeps contradicting its own comic

“We try to write comics in 2016 that are about the world and the zeitgeist of 2016, particularly in Captain America. Nick Spencer, the writer, is very politically active. He’s a Capitol Hill head and following this election very closely. So we can talk about political issues in a metaphoric way.”

Both statements were contradicted by the comics or Marvel itself, for different reasons. Brevoort’s quote was quickly proven wrong, but you can understand why he said it. You can’t sell comics by saying, “Actually this plot twist is meaningless, and everything will return to normal after Secret Empire.” Hydra Cap had to feel real.

Alonso’s statement was more awkward. Captain America: Steve Rogers was criticized for its depiction of fascism and neo-Nazism, especially in relation to Cap’s legacy as an anti-fascist hero. In response, Marvel changed its tune in the lead-up to Secret Empire this summer. Alonso said Secret Empire “has little to do with contemporary political parallels,” reframing it as a traditional Hero vs. Villain showdown. Meanwhile, Nick Spencer continues to argue that actually, Cap isn’t a Nazi—an increasingly untenable position. It’s hard to judge the comic on its own merits, because Marvel keeps trying to rebrand the same story in different ways.

Secret Empire is a typical crossover event with superheroes in dire straits, teaming up against a catastrophe. It also displays a totally warped view of its own politics. Hydra are the bad guys, but the comic buys into the propagandic idea that fascism is an efficient and powerful system of government. Captain America is the ubermensch who brings Hydra to power, fulfilling the Nazi ideal he was originally designed to subvert. So while Marvel recently reassured fans that Cap’s “core values” will save the day in the end, Secret Empire has done lasting damage to his image as a hero.