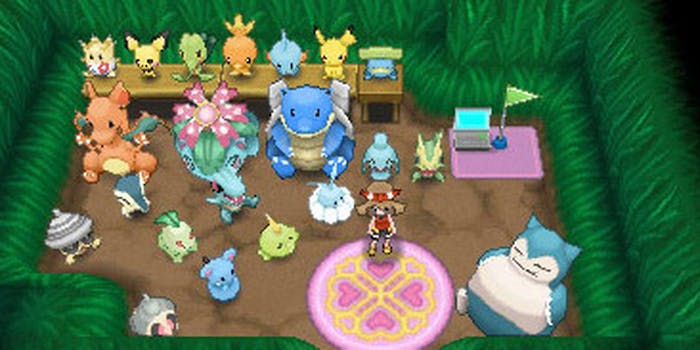 Your favorite part of Pokemon is back in Omega Ruby and Alpha Sapphire.

One of the most memorable parts of playing Pokemon Ruby back in the day was creating and customizing your own secret base. It seems that Nintendo remembers the feature just as fondly and has announced plans to bring it back in a new way.

In Omega Ruby and Alpha Sapphire, Nintendo plans to introduce new social features to Super-Secret Bases so friends can interact with one another. Of course players can furnish and decorate their Super-Secret Base to their liking, but a few new bits of cosmetic flare can be added. Players can now add “tricks” in their Secret Base, which adds a puzzle challenge for visiting friends. Users can also dictate rules for Pokemon battles, essentially creating their own gym. If you find players in the game you hit it off with, you two can become Secret Pals and keep tabs on one another. That includes battling and having your Secret Pal use “special skills” to help you on your quest.

There will be a new capture-the-flag mode in which players can steal flags from one another to increase your team’s rank and get rewards. Much like Tomodachi Life, players can share their Super-Secret Base with friends using QR codes.

The thing that made secret bases so cool was that they could be propped up anywhere. Almost any tree or mountain side in the expansive lands of Hoenn could be ground for your very own tree house or cave. Secret Bases also came before games like Animal Crossing hit the west, so the concept was rather novel. The last game to use Secret Bases was Pokemon Diamond and Pearl on the Nintendo DS, granted it wasn’t as fun as on Ruby and Sapphire.