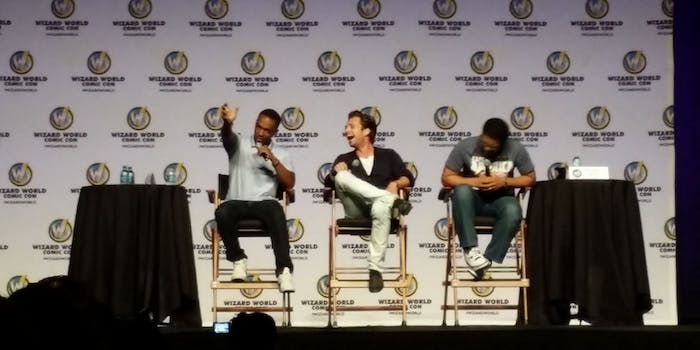 This spring’s Captain America: The Winter Soldier was a hit with Marvel fans as they packed theaters for Captain Steve Rogers’ second solo film. They watched Cap try to come to grips with corruption in S.H.I.E.L.D. and the resurfacing of his best friend Bucky Barnes, now a brainwashed, supercharged enemy known as the Winter Soldier.

Based on the popularity of the film, it’s no surprise that more than 2,700 fans crowded into the Grand Ballroom of the Pennsylvania Convention Center the Wizard World convention in Philadelphia on Saturday, to hear from two of the stars: Anthony “Falcon” Mackie, and the Winter Soldier himself, Sebastian Stan.

While a relentless killing machine in the movie, Stan, the actor outside of the indestructible arm, was very reserved, while Mackie was a crowd-pleasing favorite, engaging fans with his enthusiastic personality and quips in almost every answer.

Fans nervously asked the pair for details about of life on set as well as the future of the Marvel Cinematic Universe. They were equally informed and tickled by the pair’s hilarious ability to play off of each other.

A particularly memorable exchange occurred when a visibly nervous fanfiction writer asked the men their response to Captain America fanfiction. Mackie admitted that he had never heard of the practice; in fact, he referred to the Internet in general with disdain, calling it the “I-word.” While Stan appeared to be a bit more familiar with the idea, the pair ultimately launched into a diatribe on how people are free to say whatever they want to on the Internet and that they don’t let it interfere with their careers.

“What we do…isn’t real, you know,” Mackie said. “Sebastian flies into a room, punches me in the head, knocks me out of a building; that didn’t really happen.”

It’s safe to say the rest of the questions went smoother.

How exciting was it to play Falcon?

Anthony Mackie: See, I grew up on baseball cards. I didn’t even read comic books. But once the Marvel movies started hitting it big and I began to make a name for myself, I spent five years contacting the studios and telling them that, hey, they have to put a brother in one of these movies! Finally, I get flown out to L.A. and the Russo Brothers ask me if I want to be part of a Marvel movie and I said, “Um, hell yes.” I’ve been in two movies nominated for Oscars but when I told people I was in this one, they went wild.

How would you want your characters to die?

AM: I’d want to be blown up. I’d also want a deathmatch with Iron Man.

Sebastian Stan: The Winter Soldier would probably just dislocate his arm and beat himself to death with it.

Are there any other roles you would like to play?

AM: My passion project is to play Jesse Owens.

SS: I always wanted to play Billy Idol. Also, I’d like to be involved in a movie version of that Motley Crue book that came out recently.

AM: We should do a remake of Butch Cassidy and the Sundance Kid. Or Smokey and the Bandit!

What are your thoughts on seeing Winter Soldier fans everywhere this weekend?

SS: You guys are the fucking best. Seriously, I don’t think I’ve hugged my own family as much as I hugged you people this weekend.