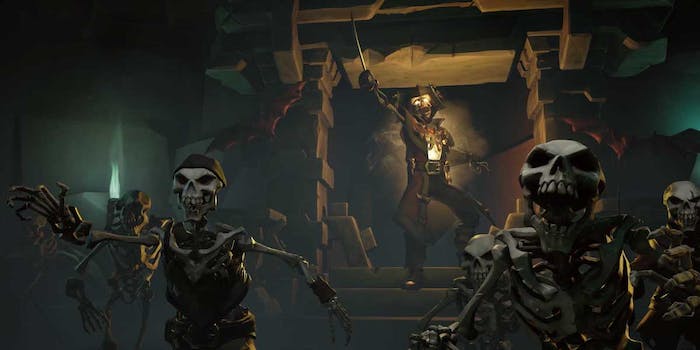 Can you crash Sea of Thieves? Here's your chance to try.

“Move fast and break things” is a common mantra in Silicon Valley. It encourages tech types to work boldly when creating better ways of doing things. But Rare, the maker of the upcoming Xbox One and Windows 10 game Sea of Thieves, means it literally.

To that end, Rare is hosting a second Sea of Thieves beta this weekend. The goal is to “stress test” the game’s servers. That means they want more players to sign on than the servers can handle. They want the game to break so they can learn how the software could fail. What they learn during the beta will help them prepare for when the Sea of Thieves officially releases on March 20.

On their blog, Sea of Thieves developers wrote:

With this added scale we expect – and plan – to see issues, that we can learn from and address. Not only are we looking to hit scale, we will also purposefully be stressing our services by throttling performance at certain times, testing the game in different data centers around the world, and simulating deliberate outages.

Some examples of the issues we expect to see are:

Sounds like it’ll be fun for players, doesn’t it? I wouldn’t blame you if you answered no. Since this isn’t the polished version of the game they want to show newcomers, this weekend’s beta is limited to Xbox Insiders, members of the Sea of Thieves Insider Program, and people who have preordered the game.

If you’d rather skip this buggy beta, don’t worry: Rare is planning one final beta before the game launches. We’ll have to wait for information about the beta’s timing and whether it will be open or closed.

Sea of Thieves is one of Microsoft’s biggest exclusives of the year. It’s a shared-world pirate game that lets you and your friends team up to sail the seas in search of treasure. It has an appealing art style, but we don’t know if it’s fun to play solo.

The stress test beta starts Friday, February 16th at 5 a.m. EST and ends Sunday, February 18th at 5 a.m. Even if you don’t play one of the betas, you’ll still be able to try the game for free. Just wait until it comes out on March 20, and start your 14-day free trial of Xbox Game Pass.