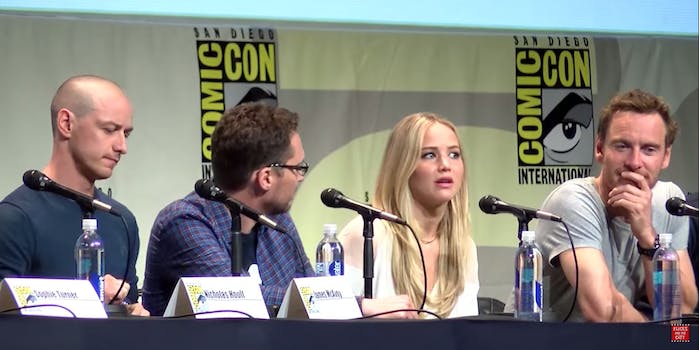 FLICKS AND THE CITY

San Diego Comic-Con attendees queue overnight to get into Hall H, the venue for all the biggest panels like Star Wars, X-Men and Batman. In return, fans get to see exclusive footage and hear behind-the-scenes gossip before anyone else.

Many SDCC trailers don’t appear in public for months, and some—for example, early edits that were screened before the addition of visual effects—are never shown again. This means Hall H’s security is punishingly strict, with audience members forbidden to film anything shown on the big screen.

Of course, that didn’t stop three of the biggest trailers from being leaked this weekend. Shaky handheld videos of the Deadpool and Suicide Squad trailers went viral within hours, while the X-Men: Apocalypse teaser reel surfaced on Reddit on Monday morning.

Warner Bros. and Fox are not happy about these leaks, to the point that they might “carry consequences” for future Comic Cons. Could this mean fewer exclusive trailers being screened for the Hall H crowd?

As much as I want the #deadpool footage from #SDCC officially released, the VFX shots aren't done yet. We have something for you in 3 weeks.

Warner Bros. representative Sue Kroll told Deadline, “We have no plans currently to release the Suicide Squad footage that leaked from Hall H on Saturday. It’s unfortunate and ultimately damaging that one individual broke a long-standing trust we have enjoyed with our fans at the convention by posting early material, which, at this point, was not intended for a wider audience.”

When someone leaked the trailer for Avengers: Age of Ultron (unrelated to SDCC) last year, Marvel Studios responded by releasing the official version… and then subpoenaing Google to identify the leaker. The studio’s public reaction was to shrug off the leak with a funny tweet, but Marvel was noticeably absent from Hall H this year.

To a certain extent, it makes sense for studios to express frustration at SDCC’s failure to crack down on trailer piracy. But it seems a little odd in the case of Deadpool and Suicide Squad. Deadpool wouldn’t even exist without the massive online hype caused by leaked test footage, while most people have only heard of Suicide Squad as a result of leaked on-set photos of Harley Quinn and Batman.

Screengrab via Flicks and the City/YouTube