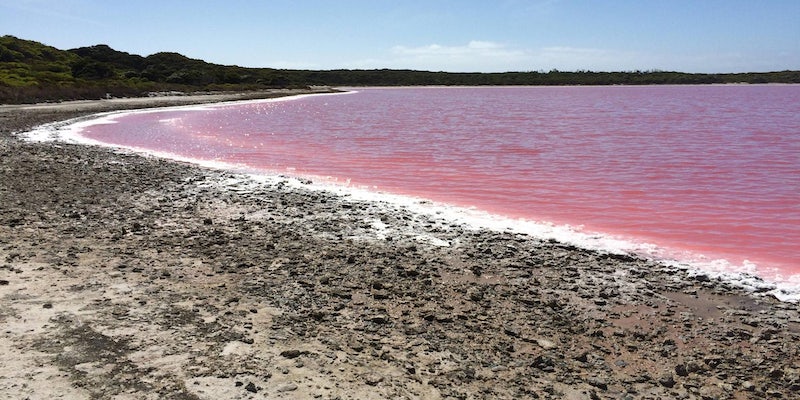 An episode on Lake Hillier inspired researchers to study it.

The YouTube educational program SciShow usually covers new and exciting scientific research. But now it’s spawned a research project on its own.

In 2013, SciShow host Hank Green brought viewers to Lake Hillier, an unusually salty lake with a bubblegum-pink hue located in Western Australia. Green reported that scientists aren’t sure what gives the lake its rosy color, but that the general hunch was that its extreme salinity supported the growth of salt-loving algae that produce reddish colors. Green cited another possible culprit for the color: halobacteria. These bacteria are part of the ancient group archaea, and are known for their love of extreme environments, like super-salty water.

But three years later, on March 11, Green announced that the mystery of Lake Hillier had been solved—and SciShow had a part in it. Researchers with the eXtreme Microbiome Project (XMP), an open consortium for researchers who want to profile the microscopic organisms that inhabit extreme environments like volcanoes and deep sea brine lakes, profiled the microbial life in Lake Hillier. According to Green, the researchers saw SciShow’s episode on Lake Hillier and were inspired to analyze the lake.

In the video, Green summarized that they found the algae in question that produces the red hues, but that the color of the lake primarily came from halobacteria and other extremophilic (extreme habitat-loving) microbes that are pinkish in color. The researchers also found a bacteria called Dechloromonas aromatica, which breaks down compounds in chemical solvents. The researchers believe this may be evidence of the lake’s history as a leather tanning station in the early 1900s.

Ken McGrath, a microbiologist in Australia who led the XMP project to profile the lake, told the Daily Dot that he wanted to analyze the microbes in the lake since seeing the original SciShow episode in 2013.

“I was in awe of the natural beauty of the place, and wanted to visit,” McGrath wrote in an email. “Of course, the remoteness of the lake meant that the cost was too high for a casual visit, and so I relegated this dream to that travel wish-list that will probably never happen.”

Later, he connected with XMP founder Scott Tighe, who had learned about the lake on a 2014 National Geographic program. They decided Lake Hillier would be the first site for the XMP. In 2015, they got all the government permits and permissions, and went about sampling the lake.

Tighe said he started the XMP as a way to test out the new tools and techniques another group of his was inventing for the purpose of analyzing the genomes and “metagenomes” of microbial communities (called microbiomes.) Metagenomics refers to the genetic material of all the organisms found in an environmental sample.

Though scientists have been extracting, isolating, and analyzing DNA for many years, carrying out genetic analyses on microbes—bacteria and even more ancient organisms, archaea—is harder because they have cell walls.

“The human cell is just like a paper mache balloon,” Tighe said. “It just kind of dissolves and pops open in hot soapy water. But bacteria has a very thick, impenetrable cell wall that you can say is analogous to armor plate. Think of it as kevlar. Then it has a cell membrane that is like, a balloon that you blow up but only half way. It’s hard to pop.”

That armor is one of the things that lets certain types of bacteria and archaea thrive in extreme environments, but also makes it very hard to get at their DNA to study it. Tighe figured, with all these new tools he and his colleagues were building as a part of the Metagenomics Research Group, using them to characterize the hardiest microbes would be the ultimate test.

What we can learn

Because they’re located in remote regions and resistant to traditional forms of analysis, we know very little about extremophiles. But they could hold the secrets to everything from new antibiotics to biofuels, Tighe said.

He added that he thinks microbiome research and analysis will soon boom into a huge industry in the biomedical field. It has applications beyond just the clinic—industrial, environmental, and commercial fields all stand to benefit from understanding the invisible communities that live on every surface of the globe. But first, scientists need reliable tools to carry out those analyses.

Fortunately, Tighe’s group’s tools work great. For the first time, they were able to profile the microorganisms that live in Lake Hillier.

“It’s really exciting that someone took one of our videos as a reason to do some new research,” Green told the Daily Dot in an email. “Like, I know that everything we talk about at SciShow has a corresponding team of real-life people doing real-life work. But because we were (however insignificantly) involved in the decision for this research to get done, it felt more real.”

Green said he was most surprised to learn that the bacteria that break down the chemical solvents were in the lake.

“That’s a thing that we wouldn’t know for sure if we didn’t find these bacteria,” he said. “Very cool how a microbial test can lead us to historical information!”