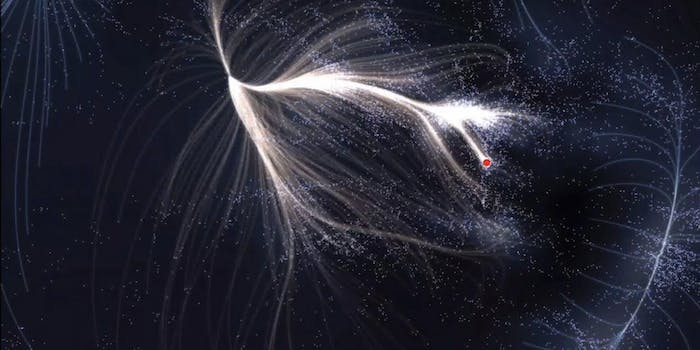 New data shows the boundaries of our galaxy’s neighborhood

That 500-million-light-year wide block party is going to be epic.

A team of researchers just mapped the position and movement of 8,000 galaxies around us, work that gives us a better understanding of our place in the universe.

A fascinating video offers an explanation of the feat:

“The entire universe can be seen as an intricate network of galaxies, a cosmic web. Some areas are almost empty—dark voids. Others are densely packed with galaxies, in regions known as superclusters,” the video explains. Superclusters are the biggest structures in the universe and span over a hundred million light years.

We used to say we were in the Virgo Supercluster, but the new work shows that enormous group is just a smaller appendage of the Laniakea supercluster. Researchers have tried to map the supercluster before, but it is tricky to understand where one group of galaxies begins and another ends. In the new work, published today in Nature, the team figured it out by looking at how the galaxies are moving through space and created “a map of cosmic flows” as galaxies are pulled by gravity.

“We’re finding the edges, the boundaries,” Brent Tully, an astronomer with the University of Hawaii and one of the authors of the paper, told National Geographic. “It really is similar to the idea of watersheds on the surface of the planet. The edges of watersheds are pretty obvious when you’re in the Rocky Mountains, but it’s a lot less obvious if you’re on really flat land. Still, the water knows which way to go.”

The researchers named our supercluster Laniakea, which has been translated from Hawaiian as “immense heaven” or “immeasurable heaven.” The two translations mean approximately the same thing, but the first seems more apt because as astronomer Phil Plait points out the latter “has an ironic ring to it, given that measuring is exactly what we’re doing.”

The Milky Way, our galaxy, lies on the outskirts of this cosmic neighborhood.

But even the Great Attractor, along with the rest of our supercluster, is moving inexorably toward something else—a larger grouping of galaxies called the Shapely Concentration. “We don’t have enough information yet to find the Shapley Concentration’ outline,” Tully said. “We might be part of something even bigger.”