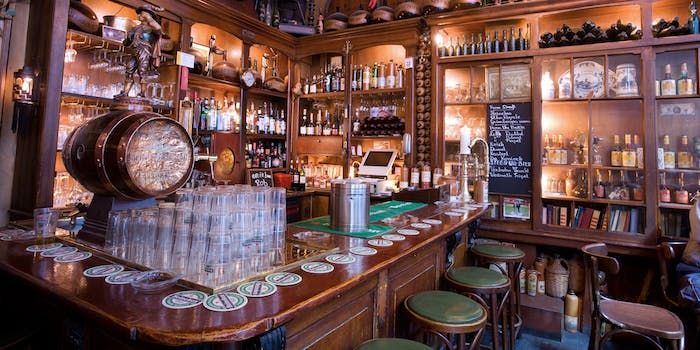 The science behind why local beer actually tastes better

Perfectly sandwiched between drinking holidays Saint Paddy’s and Cinco De Mayo, National Beer Day marks the glorious day in American history when selling beer became legal again after the repeal of Prohibition. You may be tempted to reach for the Budweiser, because it’s cheap, Anheuser Busch is a good ol’ ‘Murican brewery, and because local craft beer is for hipsters.

Right? Wrong. If you really want to celebrate beer, you should be reaching for those local craft brews—keyword: local. Local beer (usually) means fresher bee,r and fresher beer tastes better. I’ll tell you why.

Beer, like all other foods, is subject to spoilage. It doesn’t spoil in the same sense as milk or meat—drinking spoiled beer won’t hurt you. It just won’t taste as good, and that’s a real shame. As beer ages the compounds in the beer that give it its flavor break down. The result is a brew robbed of its crisp, clear flavor and replaced with a muddy, grossness that should not be tolerated.

“Beer has four main enemies: light, heat, oxygen, and time,” Collin McDonnell, co-founder of HenHouse brewery wrote in a thorough guide to buying fresh beer on Serious Eats. Here’s how each of those enemies conspire to make your beer taste bad.

You may have noticed that beer bottles come in three colors: clear, green, and brown. This is because the brewery wants to protect its beer from light exposure in transit and during its time on the shelf. Light breaks down the bright-yet-bitter grapefruit and floral notes of hops and turns them into a facsimile of skunk juice. Gross.

Heat is often wrongfully blamed for causing beer to get “skunky.” But just because heat doesn’t lead to skunkiness, doesn’t mean it’s OK to leave beer sitting in your car or on the shelf for prolonged periods. Beer is made up of a bunch of chemicals that naturally break down over time through a chemical reaction oxidation. Adding heat to the mix just speeds up the process. If you recall from high school science class, chemical reactions need energy. When you leave your beer sitting in the back of your hot car, you’re just providing the energy that is needed to break those big chemicals into little chemicals. The big chemicals taste wheaty, fruity, earthy, and delicious. The little chemicals just taste like paper.

Of course, you can’t have oxidation without oxygen! Oxidation is what causes fresh-cut apples to brown and metal to rust, says Wisegeek.com. Oxidation also leads to those paper and cardboard flavors, as well as some others. When oxygen interacts with certain compounds in beer, it can make diacetyl, which is what they use in movie theater popcorn butter. (If you taste this in beer that’s served as a draft, it’s likely that the flavor is imparted by grossness in the lines and a tap that’s in desperate need of cleaning.) Oxygen can also lead to nice flavors like honey. So it’s not all bad. Furthermore, there’s not much you can do to avoid getting oxygen in your beer. Too much oxygen in the beer is usually the result of poor handling by the brewer.

Sadly most beer is shipped without any consideration for exposure to the elements, especially temperature. So the shorter the distance traveled from the brewery to your gullet, the better.

Of course, just because you buy your local brewery’s product from your local liquor store doesn’t mean it hasn’t been sitting on the shelf, exposed to light and heat for who knows how long. You can circumvent this issue by looking for a “bottled on” date and make sure to drink it within a month or two of that date. But the best thing to do is to go direct to the brewery’s tap house. Any brewery worth their salt will have bartenders who know when the beer was kegged and who keep their equipment clean so you know you’re getting the freshest, cleanest, most delicious beer.

Photo via Jorge Royan/Wikimedia (CC BY 3.0)