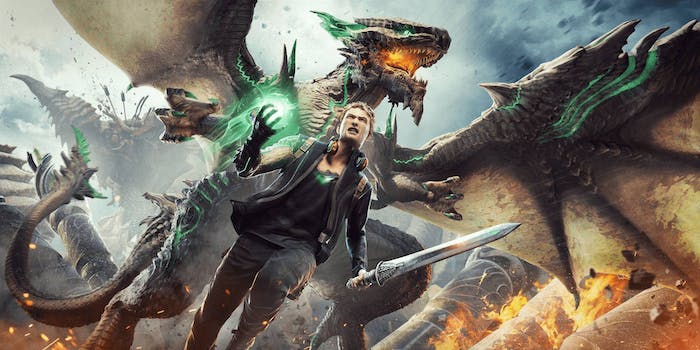 Has Microsoft canceled the Xbox One game Scalebound?

The four-player dragon game may be in trouble.

One of Xbox One’s biggest upcoming games may have been quietly canceled by Microsoft.

Scalebound comes from Platinum Games and acclaimed director Hideki Kamiya, famous for Bayonetta. Originally revealed at E3 2014, the game was shown off at multiple subsequent conferences and was expected to hit Xbox One and Windows 10 platforms later this year.

Multiple sources are reporting that the game’s troubled development has led to its cancellation. There has been no official word regarding the game on Microsoft’s part, but it was absent from a recent blog post detailing upcoming Xbox One games and features.

Microsoft released a statement to Kotaku that simply says, “We’ll have more to share on ‘Scalebound’ soon” and points out that the game has been removed from the official Xbox website.

Scalebound was to feature four-player simultaneous co-op, and it centered around the relationship between players and dragons. You can revisit some recent gameplay footage below.

Update 2:42pm CT: Microsoft has confirmed to IGN that it has indeed canceled Scalebound.

In a statement, the company said “After careful deliberation, Microsoft Studios has come to the decision to end production for Scalebound. We’re working hard to deliver an amazing lineup of games to our fans this year, including Halo Wars 2, Crackdown 3, State of Decay 2, Sea of Thieves and other great experiences.”