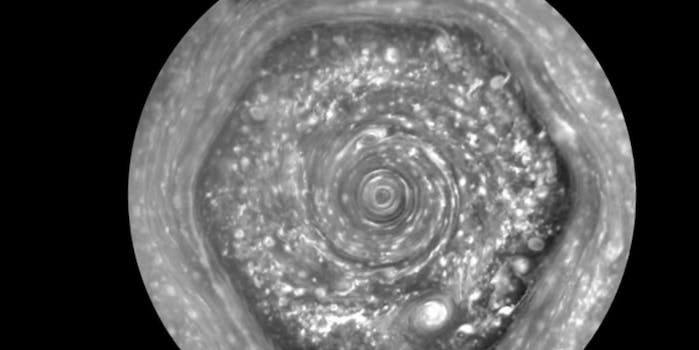 There’s always something strange going on with Saturn, the solar system’s most photogenic planet.

There’s always something strange going on with Saturn, the solar system’s most photogenic planet—from the famous rings that baffled Galileo 400 years ago to the methane dunes and lakes of its smoggy moon Titan.

In 10 years of cruising Saturn and its vicinity, NASA’s Cassini spacecraft has seen kinks, braids and waves in the rings so high that they cast shadows across the other rings, and the spacecraft’s cameras recently counted 101 geysers of water shooting from a subsurface ocean through cracks in the icy moon Enceladus.

In its latest spins around the ringed planet, Cassini has focused on a lesser known but hardly less mysterious feature of Saturn, an atmospheric phenomenon whose description—the six-sided vortex—is more evocative of Harry Potter or “Star Wars” than your standard weather report.

When the Voyager spacecraft flew past Saturn in 1980 and 1981, they discovered that the planet’s north pole was capped by a gigantic hexagon-shaped storm, the mother of all polar vortexes. It is an immense hurricane four times the size of the Earth bordered by a jet stream blowing 220 miles per hour.