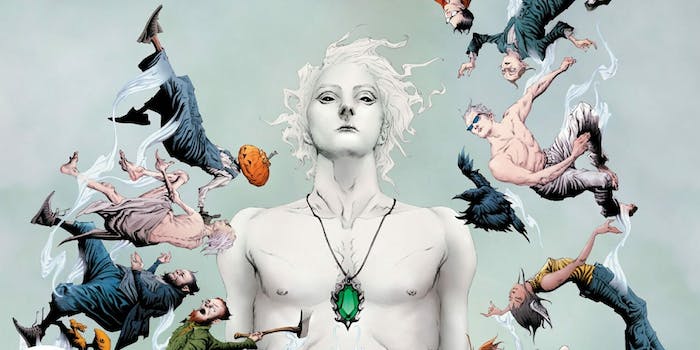 ‘Sandman Universe’ is a great Sandman comic, but is it playing too safe?

Thirty years on, Neil Gaiman’s Sandman returns with Sandman Universe, an epic new saga consisting of four series by different creative teams. Gaiman acts as a kind of producer, collaborating on the initial concept before allowing the new writers and artists free rein to play in the Sandman sandbox.

The standalone volume Sandman Universe #1 kicks off the new spinoffs, reading like an organic prequel to all four comics. Beginning in the Sandman’s home, the Dreaming, the raven Matthew visits each new story while searching for his missing master in people’s dreams. If you found that last sentence impenetrably confusing, I have some unfortunate news: This comic is aimed squarely at fans of the original Sandman. If you’re a new reader, you’re better off starting with 1989’s Sandman: Preludes and Nocturnes.

While the original Sandman also began in media res with a similar premise—Dream is missing, leaving the dreamworld defenseless—this comic tacitly expects you to know who most of the characters are already. One strand is actually a continuation of Gaiman’s 1990s fantasy comic The Books of Magic, starring the proto-Harry Potter boy wizard Tim Hunter. The rest seem to take place in the present day (ie. chronologically after Sandman, with Daniel as the new lord of dreams), although this is a universe where time can be malleable.

Opening with an alliterative monologue from Dream’s librarian Lucien, our introduction to The Dreaming (writer Si Spurrier and artist Bilquis Evely) is the most obvious successor to classic Sandman. In a way, this highlights the key problem with sequelizing such an iconic work: What was unique and discombobulating in 1988 now feels like a nostalgic return to familiar territory.

With creative teams personally selected by Gaiman, each of the four Sandman Universe titles has its own appeal, but for now, they all feel like safe choices. In a word, none of them are weird.

The Dreaming embarks on another hunt for a recalcitrant Sandman. House of Whispers (writer Nalo Hopkinson and artist Dominike Stanton) introduces the voodoo deity Erzulie alongside a young lesbian couple in New Orleans, suggesting a similar tone to the more human-focused narratives in Sandman. Both feel very close to the voice of classic Sandman—particularly Bilquis Evely’s recreation of the Dreaming’s bizarre architecture—albeit with less lofty foreshadowing than the gloomy Preludes and Nocturnes. Meanwhile, The Books of Magic sequence (writer Kat Howard and artist Tom Fowler) felt like a throwaway scene to me, an admitted Books of Magic ignoramus, but it may hold more meaning to longtime readers.

Tastes will vary—that’s the point of this kind of collected volume—but my personal favorite was Lucifer by writer Dan Waters and artists Max and Sebastian Fiumara.

Lucifer is Sandman’s most popular spinoff character, similar to how John Constantine gained a life of his own after his background role in Swamp Thing. Conceived as a rock star spin on the Biblical Satan of Paradise Lost, the Lucifer we see in Sandman Universe is a reminder of how utterly wild it is that someone adapted his comic into a procedural crime drama. He appears here as a nude, blood-spattered David Bowie lookalike who speaks in blank verse, offering a more baroque kind of mystery than the fantasy premise of the other Sandman Universe prologues.

The new Sandman Universe titles will launch in September and October, beginning with The Dreaming on Sept. 5.